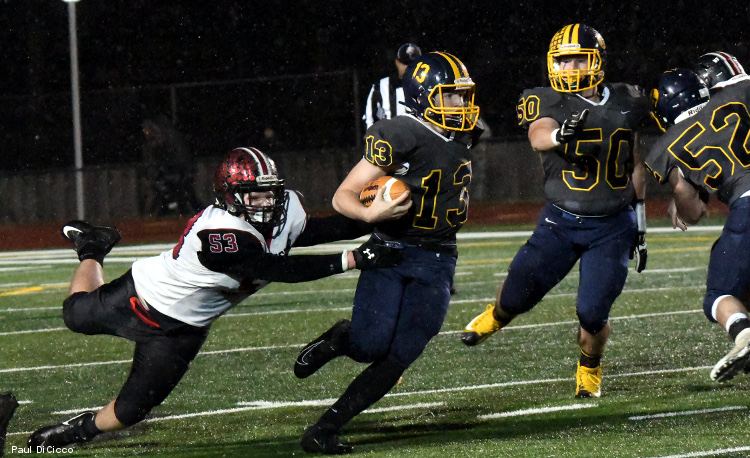 Manchester’s Ethan Wright became the first Hornet opponent to rush for over 100 yards when he carried 25 times for 198 yards and a seven-yard touchdown in the second quarter. Kirtland’s defense was tested but the Hornets made key plays at key times to keep the Panthers off the scoreboard the rest of the way in a 32-7 win that sent the Hornets to their eighth state Final Four in the last nine seasons.

After a penalty-ridden first drive, Manchester punted the ball to the Hornets, who took over at their own 23. A penalty moved the ball back to the 17 and Luke Gardner ran for an 83-yard touchdown on the next play. Mason Sullivan converted the two-point try and Kirtland led 8-0 with 9:09 left in the opening quarter.

Manchester’s next drive ended the same way as the first, with a punt back to the Hornets.

Once again, it took Kirtland just two plays to increase its lead. Liam Powers threw an 80-yard touchdown pass to Gardner that made it 15-0 with 5:05 remaining in the first.

Both teams traded punts before the Panthers put together a scoring drive that carried over into the second quarter.

The eight-play drive covered 80 yards. Ethan Wright carried five times for 73 yards on the drive that ended with his seven-yard touchdown run that cut Kirtland’s lead to 15-7 with 10:16 left in the first half.

Gardner responded with his third touchdown of the night, this one on a 23-yard run to push the lead back to 22-7.

It remained that way until Kirtland’s first drive of the third quarter when Mario Rodin booted a 25-yard field goal.

Sullivan added a 53-yard touchdown run in the fourth quarter to close out the scoring.

Gardner led the Hornets with 137 rushing yards on nine carries and he also caught the one pass for 80 yards. Sullivan ran for 96 yards on 13 carries.

Kirtland (13-0) will play Oak Harbor in a Division V state semifinal on Saturday at a location to be determined.