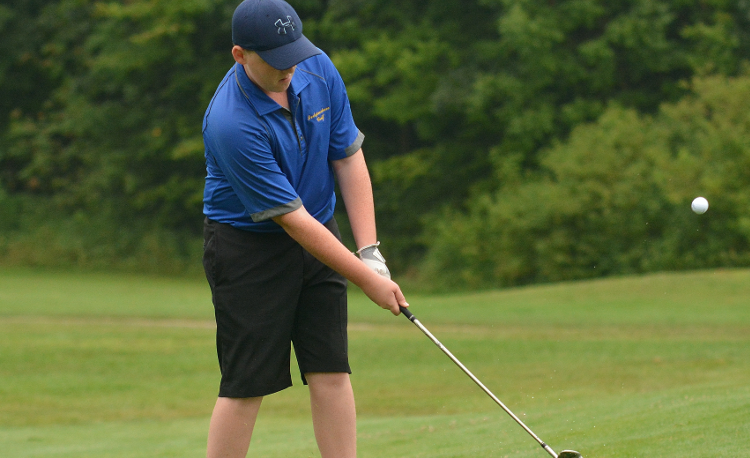 The Hawks, who on Monday claimed a title at the CVC Preseason Tournament, finished Monday’s round with 322 strokes. Chardon was second with 347.

Hawken’s Drew Covitt and Tommy Hill carded a 75 and 76, respectively, to finish first and second.

The medalist honor was the second straight for Covitt, who won Monday’s CVC tournament.

“I am very happy with how I have played in my last two tournaments,” Covitt said. “It is nice to be able to put up good scores so early in the season. This is a good confidence boost going into the rest of the season.”

Covitt worked hard over the summer to improve his overall course management and to develop a strategy to deal with the different weather and course conditions he’d face this season.

“Coach (Bert) Kovarik is always talking to the team about how (important) course management is, so it is always on my mind when I am playing,” Covitt said. “Although it rained for a majority of the round, I made an effort to stay focused for all 18 holes. Through my experience playing in the rain, I have learned to club up. For example, if I am hitting a 150-yard shot, I will take a 9-iron rather than a pitching wedge.”

Through three events over the first two weeks of the season, Covitt has a second-place finish and two firsts to his credit.

“For me, the key to consistent play is practice,” he said. “I have been working hard to form a repeatable golf swing, which builds my confidence on the golf course. High school golf is a team sport because everyone’s score counts and I am lucky to be a part of Hawken’s golf team. Our support is what helps the team play consistent golf.”

Wickliffe also competed but with just three golfers the Blue Devils didn’t score as a team. Mario Cefaratti shot an 88 to finish seventh overall for the Blue Devils.

Independence’s Andrew Marcinko shot an 89 one day after shooting 83 to earn a share of the medalist honors at the CVC Metro Division preseason tournament.

“It feels great but I know that there is a long way to go and I need to keep working hard,” Marcinko said of his early success. “Feeling confident is great but I try not to focus on personal success too much. All I hope for is to continue to contribute to our team’s success.”

Like Covitt, Marcinko also had a strategy to battle the elements on Tuesday.

“I just focused on the shot in front of me instead of the adverse weather conditions,” he said. “My 6-iron felt good but I’m just happy to help contribute to a good team finish.”

Alex Mulacek led Berkshire with a 91.