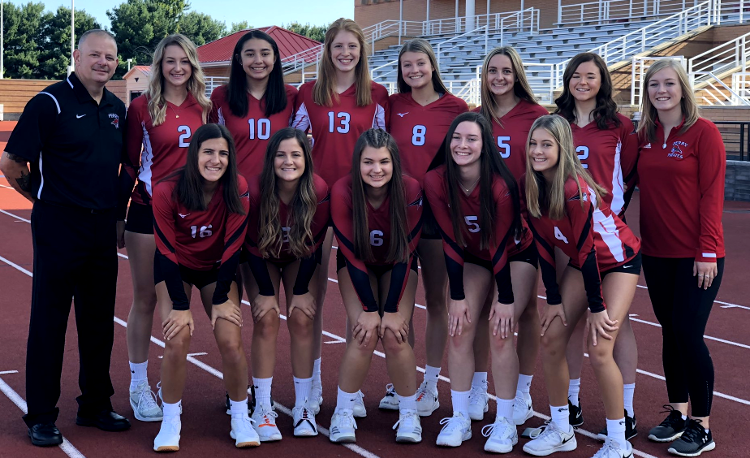 The Pirates, who finished 5-13 overall last season, return six starters. That experience should help Perry to overcome its lack of upperclassmen.

“This team has the potential to be a top team in the conference,” Fitzgerald said. “They have had trouble in the past finding ways to work together and putting down balls, but they have worked extremely hard this summer and have really come together. I am very excited to see what this team can do after having an undefeated regular season in summer league at NEO in Euclid.”

Fitzgerald’s keys to success include communicating and working together to execute on the court. That strategy is especially important considering Perry’s youthful roster.

“We are a fairly young team with one freshman and five sophomores,” Fitzgerald said. “Our upperclassmen have been bonding well with our underclassmen and they may be young but are extremely coachable.”

Just two seniors are projected to start for the Pirates.

Candace Woodward, a libero and the team’s Defensive MVP and Brandy Siegel Award recipient, and middle hitter Mandy Schultz were named team captains and will be leaned on to provide leadership to the young Pirates.

“Candace is one of our four returning seniors and she brings experience, leadership and outstanding passing skills to the Pirates,” Fitzgerald said. “Mandy is another returning senior with high school and JO experience. She is a powerful hitter in the middle and strong blocker. We are expecting great things from Mandy this season.”

Junior right-side hitter and setter Sydney Moon is the only other upperclassman in the projected starting lineup.

“Sydney is a returning starter and brings a hard swing and positive attitude to the team,” Fitzgerald said. “Sydney is a quality utility player and can be used at any position on the court.”

DiBease is an outside hitter, Bjorksen will hit from the outside or right side and Tomoletz is a middle blocker.

“Sammie is a transfer back into the Perry School system from Lake Catholic and we couldn’t be happier to have her back home. Sammie is a 6-foot-2 sophomore power hitter from the outside. Sammie was (on the) all-tournament team at the 2019 Power League and led her JO team with the top kills this past season. She brings power, hype and skill to the Perry Pirates,” Fitzgerald said. “Mary was moved up to varsity last season after some injuries and was able to show her true potential. She has become a strong hitter from the outside and continues to develop her skills daily. Mary was MVP for her 2019 JO team. Jaelyn returns to the Pirates’ lineup after missing much of the 2018 season due to injury. Jaelyn is a strong middle blocker and has been improving on her attack.”

“Emily is a senior and returns as a setter for the Pirates. She brings high school and JO setter experience to the lineup,” Fitzgerald said. “Cara is the only freshman on the varsity team. Cara is a versatile player and can be used anywhere on the court. I look forward to seeing what she can do to make our team better now and in the future.”