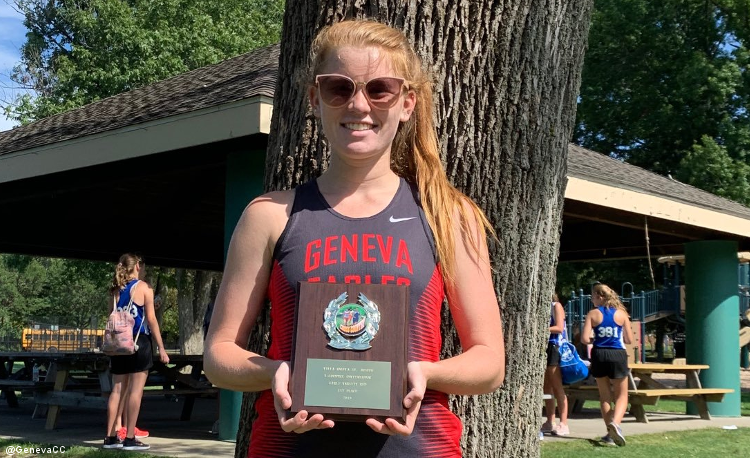 Geneva’s and West Geauga’s cross country teams both turned in strong performances at the McDonough Invitational hosted by Villa Angela-St. Joseph on Saturday.

Geneva’s boys’ team finished third in the Red Division while the Eagles placed seventh in the girls’ Red Division.

“Both teams ran very well today,” Geneva coach Emily Long said. “We had three (personal records) today by Brier Streets, Caleb Selman, and Noah Johnson. I was super happy on their placement in the race, especially by the top three individuals in each race.”

Jacob Mirabell led the Eagles with a fifth-place finish in 17:04. Zach Reese and Alex Reese also placed among the top 25 with times of 17:54 and 18:00, respectively. Zach finished 22nd while Alex was 25th.

Elizabeth Joy had a busy day.

She started the morning with the ACT exam then raced over to the course and won the race in 20:39.

“It feels like we are finally getting in our groove and coming together as a team,” Long said.

“I’m very proud of the boys,” West Geauga coach John Boylan said. “The top three runners were unavailable on Saturday (due to the ACT). This gave some of the younger runners an opportunity and they all stepped up to the challenge. Led by junior Kenny Kirk, the only upperclassman running, the boys dominated the race. I am so proud of all of their performances.”