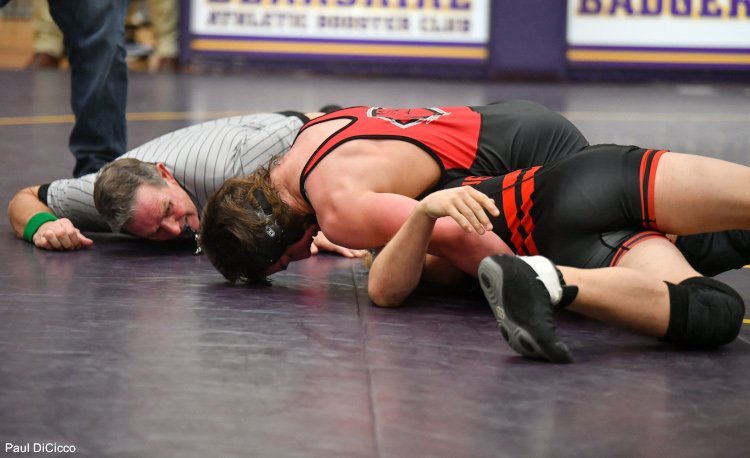 Wrestlers from the Chagrin Valley Conference opened the final leg of the road to the state tournament at one of three district competitions on Friday.

Seventeen CVC wrestlers won their first two bouts of the tournament and will compete in Saturday afternoon’s semifinals. Each wrestler needs just one more win to earn a berth into the state tournament.

Listed below are the results from the first day of wrestling at each of the three Northeast district tournaments.

Lakeside’s Lucas Eland and Christian Fleissner both will wrestle their way through the consolation bracket.

Eland opened the tournament with a 6-3 win in the first round at 113 pounds and then was pinned in the quarterfinals. He’ll wrestle the winner of the match between Keston’s Leo DiPadova and GlenOak’s Finley Peeler in the consolation second round.

Fleissner was pinned in the first round at 285 and will open his consolation run against Nordonia’s Corey Parker.

The host Perry Pirates are in fourth place overall after a strong first day of competition. The Pirates advanced three wrestlers to the semifinals round including Zach Bellissimo, Brock Christian, and Calvin Rowan.

Bellissimo used a pin and a major decision to reach the semifinals at 120 pounds where he’ll wrestle Rueben Pina-Lorenzana from Firelands.

Rowan opened the tournament with a pin and then won by default in the quarterfinals. He’ll wrestle Howland’s Carter Mock in the 144-pound semifinals.

Allen recorded a pin and a technical fall at 126 pounds. He’ll wrestle Anthony Perez of Cuyahoga Valley Christian Academy in the semifinals.

Sparent used a pin and a 10-4 decision to slide into the 138-pound semifinals where he’ll wrestle St. Vincent-St. Mary’s Elliott Alessia.

Partain used a pair of decisions to advance to the 150-pound semifinals. He’ll square off against Chardon’s Will Vucetic.

Lucas won by pin and a 9-6 decision and will wrestle Louisville’s Noah Peterson in the 175-pound semifinals.

Kirtland closed out the first day of the competition in eighth place with 35 points.

Will Davidson and Louka Babic both advanced to the semifinals for the Hornets.

Davidson opened the tournament with a pin and then needed a 10-8 sudden victory decision to slip past Waynedale’s Jake Sundberg. He’ll wrestle South Range’s Raymond Cmil in the 132-pound semifinals.

Hawken advanced three wrestlers into the semifinals including Patrick Reineke, Jacob Hlifka, and Will Greenberg.

Reineke used a 29-second pin and a 4-3 decision to reach the 120-pound semifinals. He’ll square off against Mapleton’s Brock Durbin in the semifinal round.

Hlifka won 6-4 and 8-2 and will wrestle Smithville’s Michael Harris in the 144-poud semifinals.

Greenberg advanced to the 285-pound semifinals by the slimmest of margins. He won his opening bout 2-1 over Cardinal’s John Avalon and then recorded a 4-3 decision in the quarterfinals. He’ll see Mapleton’s Joe Shoup in the semifinals.

Berkshire and Crestwood both had two wrestlers open the tournament with back-to-back wins.

Josh Brown and Lucas Stoddard both advanced to the semifinals for the Badgers while Mason Daniels and J.P. Wrobel will represent the Red Devils.

Brown won by major decision and default at 157. He’ll wrestle Tuslaw’s Jacob Lyons in the semifinals.

Stoddard flattened both of his opponents in the first round to reach the 190-pound semifinals where he’ll wrestle Mogadore’s Tyler Knight.

Daniels, a No. 4 seed, opened the tournament with a pin of No. 1 seed Gaetano Savelli of Kirtland and then won 9-6 in the quarterfinals. He’ll wrestle Chalker’s Landen Duncan in the 144-pound semifinals.

Wrobel cruised to the 126-pound semifinals with a technical fall and a pin. He’ll face Waynedale’s Caden Schmeltzer in the semis.

Cuyahoga Heights 175-pounder Luke Torgerson also reached the semifinals. He won 9-3 in the first round and 6-5 in the quarterfinals. He’ll wrestle Black River’s Charlie Wells in the semis.

Twenty-one others remain in the hunt for a state berth but they’ll have to make a run through the consolation bracket to punch their ticket to the state tournament.