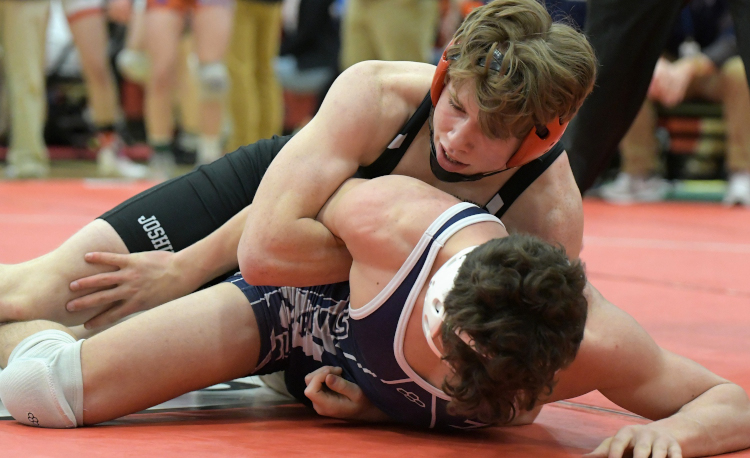 Perry’s Colin Koenig placed third in Division II while Kirtland’s Will Davidson and Lucas Stoddard and Lutheran West’s Donovan Palmer did the same in Division III.

Koenig, a senior who qualified for the state tournament last winter before it was canceled due to the Coronavirus, finished the year with a 30-2 record after his run at 145 pounds.

After dropping his semifinals bout early on Sunday, he pinned his way into the third-place match and closed out his career with a 9-0 major decision over Norton’s Jayden Morr.

This is what wrestling is all about. Coach, wrestler, program, family with Dave Rowan and Colin Koenig of @Wrestling_Perry pic.twitter.com/q4VQ77w6EI

Davidson, a junior, also dropped his semifinals bout but finished his 120-pound run with back-to-back wins. He won 3-0 in the consolation semifinals and then used a last-second reversal to beat Legacy Christian’s Logan Attisano, 2-1, for third place. He finished the season with a 33-5 record.

Stoddard suffered his first loss of the season in the 182-pound semifinals, 3-2, and then won a 14-12 high-scoring affair to advance to the third-place bout where he scored an 8-0 major decision. Stoddard, who also was a state qualifier in 2020, finished his junior season with a 49-1 mark.

Palmer, a senior 160-pounder, suffered a semifinals loss but finished the tournament with a 5-0 win and a pin to earn All-Ohio honors. He finished the year with a 45-2 record.

Bellissimo, a junior 106-pounder who finished the year 31-6, won his first bout and then dropped into the consolation round. He won three straight matches before falling in the third-place bout, 7-4.

Jackson, a 170-pound senior, suffered a tough fate as he defaulted out of his semifinals match with an ankle injury and forfeited his final two matches to finish sixth with a 38-4 season record.

Christian took the long route to the podium as he dropped his first bout in the 120-pound bracket. He won back-to-back consolation matches before falling in the consolation quarterfinals, 6-3. He finished the tournament with a 2-1 win the seventh-place match and a 35-5 season record.

Allen became the first Lion to place at state since 2003 when responded to a quarterfinals round loss with a 13-3 major decision to earn a spot on the podium at 126 pounds. Allen defeated Sparent, 1-0, for seventh place. He finished the year 28-3.

Reineke, a junior who placed eighth in 2019 and also qualified for the state tournament last season, lost to the state runner-up in the quarterfinals and suffered an overtime defeat in the consolation quarterfinals but closed out the year with a 6-3 win to place seventh at 113 pounds.

Sparent, a junior who finished 26-5, lost in the championship quarterfinals and then won a consolation bout to earn a spot among the top eight. He dropped his final two bouts, including the loss to CVC rival Allen.

Jack Sparent of @WestGAthletics Talks about placing eighth in the state tournament, and his drive to get back to work starting next week with freestyle. pic.twitter.com/0D6c1dZK3z

Cottrell, a 220-pound senior, won two bouts at the state on the way to his top eight finish. He closed out the year with a 32-6 record.