Dalessandro hits 1,000 in win over Edgewood 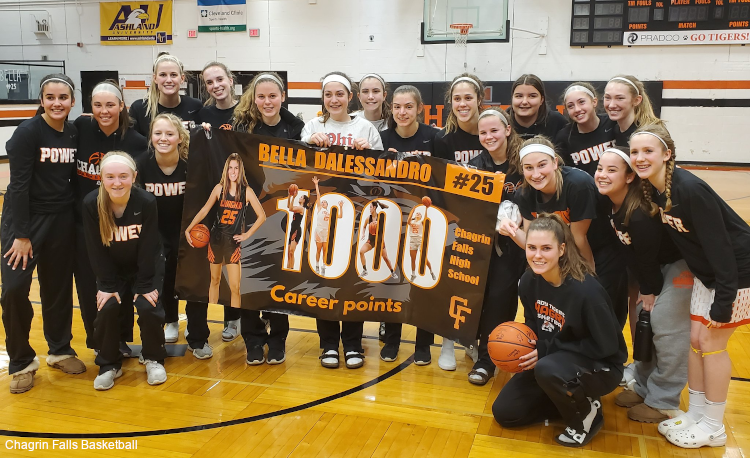 Prior to the start of Monday’s game against Edgewood, the Chagrin Falls girls’ basketball team honored its seniors who were playing their final home game of the regular season.

After tip-off, Bella Dalessandro made sure she’d never be forgotten as she became just the eighth Tiger to reach the 1,000-point milestone in a 56-22 win over the Warriors.

“This was our final regular season home game and a great team win,” Chagrin Falls coach Brittany Anderson said. “Our seniors have been outstanding leaders for us all season and they put together a solid game tonight. The team played unselfishly, looked for opportunities to get their teammates to score, and pulled together to make it a special night for Bella.”

Dalessandro entered the game with 977 career points scored. She scored a game-high 24.

“I feel honored to be a part of the 1,000-point club,” Dalessandro said. “It’s a very hard goal to accomplish and I did so with the endless support from my teammates, family and coaches.”

During the game, Dalessandro wasn’t exactly sure how many more points she needed so she focused on the task at hand.

After she swiped the ball from an Edgewood guard, she drove the length of the court and finished it off with a left-handed layup before being mobbed by her teammates.

“Bella makes hustle plays all over the floor, scores off of steals, scores in transition, knocks down outside shots, hits pull up jumpers; she does it all,” Anderson said. “She gave everything she had tonight and we were so excited to celebrate this milestone with her.”

Now that she has joined the exclusive 1,000-point club, Dalessandro hopes some of her current teammates and future Tigers follow in her footsteps.

“I hope my younger teammates and future Tigers see the passion and drive that I have for this game and reciprocate it on the floor because these four years go by so fast and I don’t want anyone to take them for granted,” Dalessandro said.

The Tigers improved to 13-6 overall and 9-3 in the Chagrin Valley Conference.

“I am truly blessed to coach such an amazing group of girls,” Anderson said.