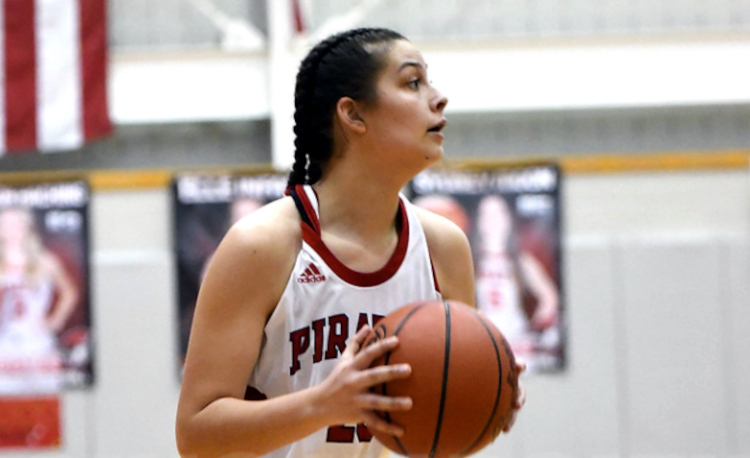 In Saturday’s district championship game, Madyson Hacking hit a long-range 3-pointer at the buzzer to save Perry’s season.

On Tuesday, in a dominating 43-23 win over Poland in a Division II regional semifinal at Barberton, the Pirates didn’t need a buzzer-beating shot. Instead, they relied on a stifling defense that held the Bulldogs to a season-low of 23 points, which was 31 points less than their season average.

“I was so impressed with our girls tonight,” said Perry coach Roy Infalvi, Jr. “The way they played defense, and even more so, I thought we beat them to every loose ball. We rebounded well and were on the floor after the loose balls. That’s what makes a difference in these types of games, it’s getting after it and wanting it more and we wanted it tonight. Our players came out and did it. I was so impressed with them.”

Perry’s defensive effort set the tone as neither team had much success in the early goings.

The Pirates broke a scoreless tie with a JaC’Ana Anderson layup with 4:23 remaining in the first quarter.

“We had Madyson on her most of the game and those are the types of challenges she loves,” Infalvi said. “We tend to put her on the other team’s best scorer and her goal is to shut them out and she almost did that tonight.”

Hacking’s defensive effort didn’t slow her down on the offensive end.

She had a team-high nine points in the first half and finished with a game-high 15.

“Throughout the first half and even in the third quarter, I kept telling myself I had to get her out and get her a minute or two breaks but she didn’t come out in the first three quarters,” Infalvi said. “We rested her about the first minute of the half in the fourth quarter. Defensively, we continued to do a good job, and offensively, she made some big shots and drives to score. She’s ready for those challenges. If I didn’t take her out of the game at all, she would have been just fine.”

Perry has struggled in recent games to get started after halftime.

That wasn’t the case against Poland.

Marcela Rodriguez scored eight of her 10 points in the third quarter, with a pair of back-breaking 3-pointers in the mix, to lead the Pirates on a 13-3 run that pushed their lead to 30-12 heading into the fourth.

Rodriguez also keyed the Pirates on defense as she altered shots, deflected passes and pulled down rebounds.

“Marcela has really stepped up for us, especially in the second half of the season,” Infalvi said. “Tonight, coming in, we’ve had a couple of games where we haven’t played a good third quarter coming out of halftime. I thought we came out of halftime today and we really did a good job. Her rebounding and getting after loose balls to keep plays alive, she gets us going in transition too, I just can’t say enough about her. She doesn’t get as much credit as she deserves.”

Rodriguez didn’t let a couple of early misses affect her performance later in the game.

“In the beginning, I had a couple shots that were off but I knew I just had to keep shooting and trust my shot and after the first 3-pointer, I started to get my rhythm down and it felt great,” she said.

Elle Infalvi scored five of her 10 points in the fourth quarter to put to rest any chance the Bulldogs had of making a late run.

Gigi Vicini and Anderson both finished the game with four points.

Izzy McKoon didn’t score but her contributions on both ends of the court set up her teammates for success.

“She has a knack for when to make the jump switch, we call them peels, but she read some really good ones today and caused some turnovers for them and got a couple of jump balls and a bunch of deflections,” Coach Infalvi said of McKoon. “I was really happy with the way she came in and played today. Last year as a freshman, in this type of game, it might have been a little bit too big for her but tonight it wasn’t. She came in and played great. She gave us a nice spark and got us into some transition and got us some more offensive opportunities because of the turnovers.”

With the win, the Pirates improved to 22-4 and will play in a regional championship game for the first time in school history.

Perry will play Laurel, who defeated Cuyahoga Valley Christian School, in the first of two semifinals on Tuesday.

“Watching Laurel before tonight’s game gave us some insight on how they play and now we have until Friday to work on what they like to do and how to stop them,” Rodriguez said.