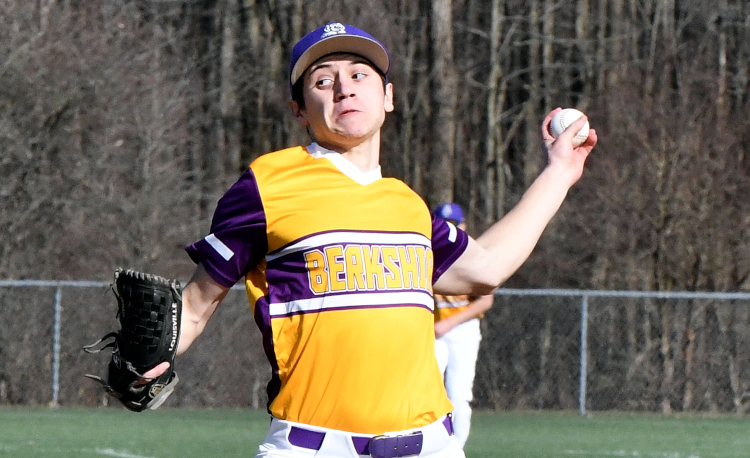 Quality pitching and a stingy defense led Berkshire to a 4-1 win over host Grand Valley on Tuesday.

The Badgers, who improved to 3-1 overall and 3-0 in Chagrin Valley Conference Valley Division, saw J.T. Bergmeier throw a complete game and his defensive teammates also stepped up to make several key plays to keep the Mustangs off the base paths.

“J.T. threw the ball very well today,” said Berkshire coach Nick Burzanko. “He got ahead of hitters and let his defense work behind him. A complete game on 82 pitches is pretty good, in my opinion, and to go through that lineup three times was a tough task but he was up to it and made it work.”

Bergmeier allowed one unearned run on five hits and he fanned six.

“Today, my location and occasional off-speed pitches were working really well,” Bergmeier said. “I focused on pitching away from the batters and forced them to either roll over the ball or hit weak pop-ups.”

Grand Valley drew a leadoff walk in the second and advanced the runner to second but Bergmeier pitched his way out of that jam. The Mustangs then had runners at first and second with two outs in the fourth but couldn’t get the clutch hit to push across a run.

Bergmeier finally yielded a run in the sixth when Hagan Hejduk singled to lead off the inning. Derek Jackson then singled before Bergmeier recorded a strikeout. Dane Sparks then singled to load the bases. Hejduk scored on a two-out error.

“The sixth inning was difficult as I gave up a few hits to the top of the order and had to work out of it,” Bergmeier said. “I was able to stay composed by trusting that my defense would make plays as they had been all game. Having a strong defense behind you is extremely relieving for a pitcher and helps keep my confidence up. They came up big today and helped me get out of a few jams.”

Jack Jacobs made two exceptional catches during the game, one that saw him climb the fence to make a grab in foul territory and the other on a ball that got caught up in the wind. Max Janssen’s running grab in the outfield saved a run and second baseman Chris Groudle also made an over-the-shoulder catch in short right field.

Berkshire scored all of its runs in the fourth inning.

Garrett Bosse drew a leadoff walk and moved to third on Chris Groudle’s single. After a strikeout, Blake Jenkins hit into a fielder’s choice as the Mustangs gunned out the runner at home for the second out.

Jacobs hit a two-out double to make it 2-0 and then Jake Brown and Brian Brent both hit RBI singles to push the Berkshire lead to 4-0.

The Badgers recorded just six hits but they made them count.

“We had very good discipline at the plate today,” Burzanko said. “We drew a lot of walks and got runners on but we just couldn’t figure out how to get that one hit to push a run or two across in those innings. Then in the fourth inning, we had guys on base and Jack Jacobs put a ball in play in short left field, which was a tough place to make a play and it fell and got by the left fielder and allowed two guys to come in and score. Then we were in the heart of our order with Brown and Brent and both had solid hits that scored runners from second to give us four in the fourth.”

Jacobs, Brown, and Brent have been a murderer’s row of sorts for the Badgers this season.

“Those three guys are very big,” Burzanko said. “We go as they go and Jack started the game off a little slow but was a spark in that fourth inning and the other guys followed suit. Jake Brown is just a very, very good hitter. He had very good at bats today and it resulted in two hits in big situations. Brent just scraps. He’s not your typical four-hole looking kid but he moves the baseball well and is very aggressive and that’s all I can ask for.”

Sparks had two hits for Grand Valley and Jackson struck out eight.

The Badgers host the Mustangs on Wednesday.