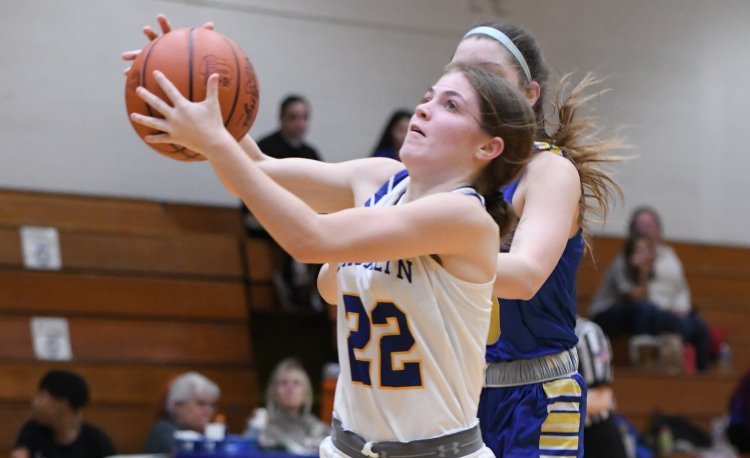 BROOKLYN—Delaney David scored a game-high 26 points and was a menace on defense in Brooklyn’s 67-62 win over visiting Independence on Tuesday.

David scored 17 points in the second half as the Hurricanes rallied back from a double-digit deficit.

“It was a really good team win,” she said. “We started off a little slow, but we came together and talked in the locker room. We had to come back because we could beat them, and that’s what we did.”

Independence’s Paige Priebe drained a pair of 3-pointers in the first quarter to help the Blue Devils take an 18-17 lead into the second.

The visiting Blue Devils stayed hot into the second quarter and their defense stymied Brooklyn enough to take a 38-29 lead into the locker room.

“We primarily played a zone against them in the first half,” said Brooklyn coach Jon Holko. “They were making a lot of shots from the outside and we were slow getting out to them and we weren’t contesting them. At halftime, we basically said if we want to come back in this game we’re going to have to play defense, so we switched it up and ran a lot of aggressive man in the second half, and that kind of keyed our offense in transition.”

David took over in the third quarter.

She scored 11 points in the frame as the Hurricanes outscored the Blue Devils 21-6 to rally back from an 11-point deficit.

David’s biggest play of the night, though, occurred on defense when she chased down Independence’s Addie Walker and forced a turnover on what looked to be an uncontested layup that would have cut Brooklyn’s lead to one point.

“Delaney is fast defensively, and so is Rayanna (Cogburn) and so is Genesis, and when our girls fly around with fundamental defense, good things happen,” Holko said. “I don’t know what the stats are, but I think Delaney may have had a double-double with points and steals. She could easily have 10 steals. It was just an all-around great performance by her, and the team showed you its resilience.”

Jade Riedel followed David’s key defensive play with a 3-pointer that killed any momentum the Blue Devils mustered on the other end.

Sharia Gailes and Caraballo also scored in double figures for Brooklyn with 18 and 15 points, respectively. Caraballo finished her night 11-for-16 from the free throw line.

At one point in the third quarter, Gailes was the game’s leading scorer, but David changed that with her big third quarter and clutch fourth-quarter shooting.

“Delaney David had a career game,” Holko said. “It was funny, in the first quarter she passed up four open looks and we got on her pretty hard, and all of a sudden, she starts shooting and it goes in. I even told her at the end that this is why we want you to shoot because we know you can do it.”

Kara DeSmith and Cat Rieger led Independence with 15 points each and Priebe (12) and Addie Westerburg (10) also scored in double figures.