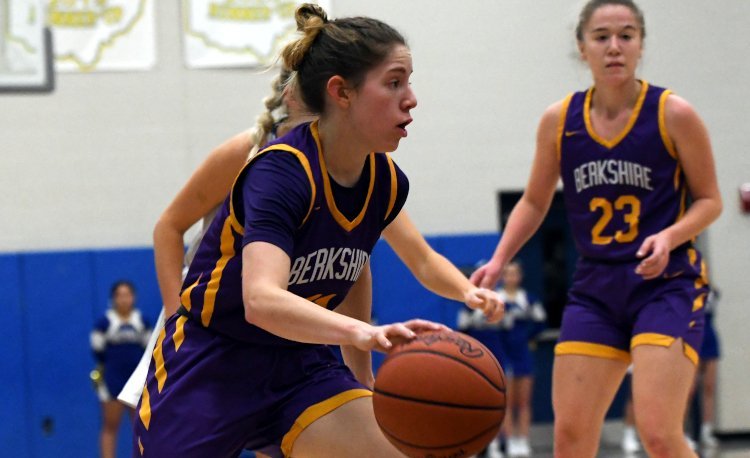 The Badgers scored the first 10 points of the game on the way to a 59-27 win over the Mustangs.

“The girls came out and played incredible to jump out to a 10-0 lead,” said Berkshire coach James Bosley. “They didn’t slow down at all after that either. Everyone was playing very unselfish and just finding the open teammate and setting each other up.”

Hayley Stoddard scored eight of her game-high 19 points during that 10-0 run. She added 10 rebounds and four steals to pace the Badgers, who improved to 6-5 overall and 3-0 in the Chagrin Valley Conference Valley Division.

Lanie Wadsworth picked up where Stoddard left off and scored eight points in the second quarter to help Berkshire keep control of the game. Wadsworth finished with 14 points and seven rebounds.

“It was nice to see her playing with that confidence and her teammates knew it and wanted to feed her the ball,” Bosley said of Stoddard. “What was just as nice was in the second quarter, Lanie had eight of her 12 and really just helped keep the lead in double digits.”

“Caroline and Natalie did great in distributing the ball and having 13 assists between the two of them,” Bosley said. “When they are seeing the floor like that and setting everyone up it’s fun to watch them play together.”

In addition to maintaining its hold on first place in the Valley Division, Berkshire also claimed bragging rights in what has turned into a neighborhood rivalry with the Mustangs.

“This was a big win for us because we have some connections to Grand Valley,” Bosley said. “Our JV coach had spent a lot of years building their program before joining our staff along with Maddy and Natalie being former Mustangs. It gets a little personal for them because they keep in contact with so many of their former classmates. It’s nice to see them battle on the court. Aside from that, it’s a good conference win for us against a quality opponent.”