Eagles rally for win at Orange 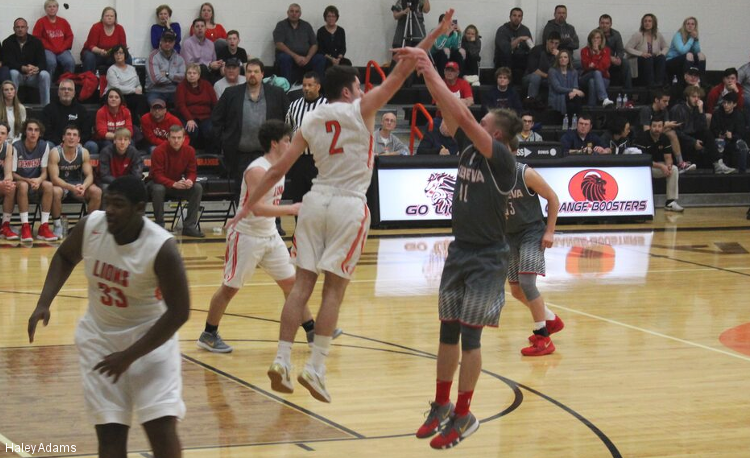 PEPPER PIKE—Geneva used a 21-10 third-quarter run to pull away for a 71-66 Chagrin Valley Conference Chagrin Division win at Orange on Tuesday.

The Eagles, who led 31-28 at halftime, used their halftime adjustments to seize control in the third quarter then held off the Lions in the final eight minutes.

“We knew they’re an athletic team and they were going to try and get up and down the floor,” Geneva coach Eric Bowser said. “We like to do that too–we like to get up and down a little bit–but we wanted to focus on playing some solid help defense and stop the dribble penetration a little bit and get some open shots. For the most part, we took advantage of that. We had a few turnovers too many but I’m happy with how the guys played.”

Bowser’s halftime adjustments worked like a charm as the Eagles moved the ball, set screens and hit some key 3-pointers early in the second half.

“We talked a lot about energy at halftime,” Bowser said. “We set up a few plays where we felt we could take advantage of some screens. We had some shooters coming off some screens and hit a couple of open 3-pointers. That kind of got the ball rolling and after that, we extended their defense a little bit and we were able to attack the basket.”

Grant Mihalick led the Eagles with 19 points and Brandon Smith and Vinnie Varkette also scored in double figures with 14 and 13, respectively.

“I missed most of last year with an injury so coming out this year I wanted to come out strong,” Smith said. “Grant and Nick (Stoltz), my other captains, our role is to carry to this team and I think we did a good job tonight. We lost a couple CVC games we should have won so this was a big game for us tonight.”

The Eagles also made a key defensive adjustment in the second half and that helped keep the Lions in check for most of the final 16 minutes.

“Their big guys were getting a lot of boards because we weren’t boxing them out,” Smith said. “Coach told us at halftime that we have to get a body on those guys. They’re big and we had to get them out of the paint somehow and we ended up doing that in the second half. They didn’t get by us and we stepped up and took some charges and played good defense.”

Scott Minor led Orange with 16 points. Nick Walters and Myles King added 12 and 11, respectively, for the Lions, who dropped to 2-6 overall and 2-3 in league play.

“This is huge,” Bowser said. “This conference is unbelievable; there are so many tough teams. You don’t get a break in any of these games. We know going in it’s going to be a battle. We just try to prepare for it every time and we snuck out of here with a win.”