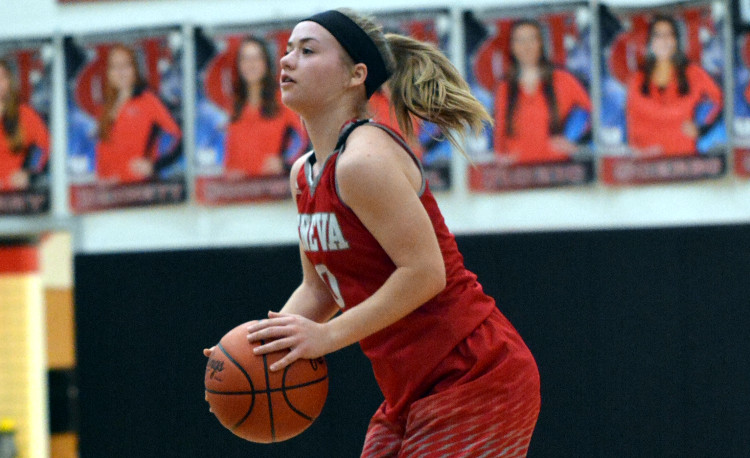 Geneva’s girls’ basketball team returns three All-Chagrin Valley Conference performers, but the Eagles have some big shoes to fill and they’ll turn to a group of talented freshmen to do it.

The Eagles, who finished 16-6 overall last season, graduated seniors Jordan Vencill and Hope Stanley, a pair of first-team all-conference performers. Prior to the school pausing its winter sports teams, the Eagles had shown some promise during a pair of preseason scrimmages.

“We did get two scrimmages in and we were actually doing very well,” said Geneva head coach Mike Hassett. “We’re going to be very young. Of course, we lost our two best ballplayers to graduation. Our goal is just to take it one game at a time, one day at a time, and just get better each day and have fun.”

Replacing Vencill and Stanley was never going to be an easy task but it’s even more challenging now that the Eagles have lost valuable practice time.

When the Eagles finally return to the court, they’ll follow a simple strategy to ease their young roster into the mix of varsity basketball.

“It’s always going to be defense,” Hassett said. “We always hang our hats on defense and we’ll always be one of the best defensive teams around. If you can play defense, you can be in any game that you play and that’s why we have been so good the last couple years, and we’ve gotten better, especially in the second half of the season. Offensively, we struggle because we’re not greatly skilled at it but you create points off your defense and we were able to do that last year.”

Juniors Olivia Wilms and Jordyn Jamison both were named second-team All-CVC while Gabbie Selman was an honorable mention honoree.

“Olivia is going to be our person in the post this year, even though we’re really not going to have a post. She’s going to be like Jordan (Vencill) was. She’s ready to take that next step and dominate down in the paint and be able to take her game outside and inside,” Hassett said. “(Jamison) is fast and can shoot the three. She can very easily average double-figures. (Selman) is an outstanding hustler and defensive player. That’s where she’ll contribute again this year.”

Reign Cribbs and Cynthia Seames are the lone seniors on Geneva’s roster. Kassie Emmett also returns with some varsity experience.

“She is outstanding but she has to build her confidence. If you saw her in practice, you’d think she’s averaging in the double-figures, that’s how good she is. It’s all confidence with her,” Hassett said. “Kassie is ready to take that next step up, too.”

The remainder of Geneva’s roster is filled with freshmen who are going to see a fair share of varsity minutes.

“There are going to be at least four with significant varsity playing time,” Hassett said. “Two of them started in our scrimmages. All the freshmen have to learn things on the varsity level, especially about defense and terminology and learning how to fast break properly.”

That group of newcomers includes Delaney Marrison and Brooke Richmond, who already have made an impact.

“(Marrison) is a jack of all trades. She can play point guard, shooting guard, small forward, power forward and even center. She’s played all the spots in our scrimmages. She’s going to be a really good one if she stays dedicated,” Hassett said. “(Richmond) is a post player similar to what Jordan Vencill was. She can also go out on the perimeter and shoot the three. Her thing is just having confidence being a freshman. In the scrimmages, she was outstanding. We’re really high on her.”

Sydney Sorber and Sydney Park also showed in the scrimmages that they have the potential to contribute early in their careers.

“When (Sorber) learns to play defense, she is going to be a complete ballplayer. She has a lot of offensive skills. She can hit the three and also create off the dribble,” Hassett said. “(Park) has been in the varsity scrimmages and has done very, very well. With all the freshmen, like I tell them, you need to relax and have fun and don’t try to do too much. If they do that, they’ll be fine.”