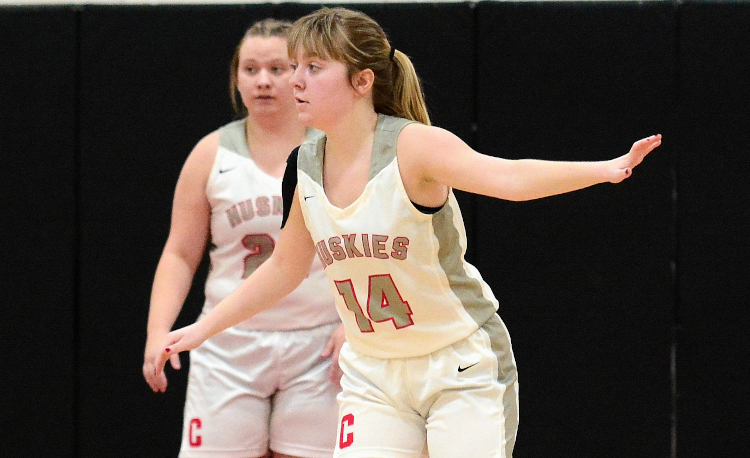 The Huskies have struggled as of late to tip-off with the intensity they’d need to play with and success has been limited. On Saturday, they started strong and never let up.

“I was happy with how the girls came out,” Cardinal coach Joe DiMattia said. “We have struggled to get going the last two games in the first half. It was nice to see the girls come out with the energy they needed. We have several games coming up that we are going to be able to compete in, so it’s important to continue coming out strong.”

After opening the game with a 9-4 advantage, the Huskies opened it up in the second quarter.

Haley Domen scored five of her team-high 11 in the quarter and Ronee Collins scored eight points on her way to a 10-point day.

Equally as important, the Huskies shut down Richmond Heights standout Imani Hendon by limiting her to just five points in the first half and 11 in the game.

Collins hit three field goals and a pair of free throws in the second as the Huskies outscored the Spartans, 21-7, and took a 30-11 lead into the break.

Cardinal’s offense was limited in the second half but by then the Huskies had built a large enough lead to coast to their second win.

“Ronee played well in the second quarter and was able to get a couple easy buckets off our press and was able to hit some other outside shots as well with good assist from her teammates,” DiMattia said. “Haley was herself–close to 10 points a game and aggressive on defense. Bri Doolittle had a good game. She has gotten stronger since our last two games. It’s good to see her bounce back.”

Doolittle and Taylor Soltis both contributed to the win with seven points. Julianna Pollack finished with three and Lorena Fortenbury and Megan Ehrhart each added two.

“It was a great team win,” DiMattia said. “Everyone played and almost everyone got in the scorebook and all contributed. You can see the freshmen are gaining confidence as the season continues.”