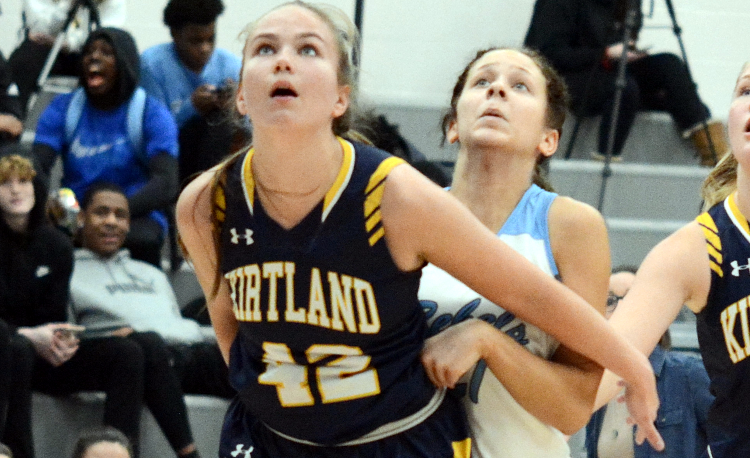 Despite the offensive success, the Hornets relied on their defense to compensate for their size disadvantage against the bigger Trojans.

“We switched up our defenses a lot and noticed that our zone was extremely effective,” Kirtland coach Brittany Zele said of the defensive effort, despite being undersized. “We ended up staying in that for the game, which helped contain the paint.”

“We are so much smaller than most teams we play but these girls are so aggressive and are not intimated by size,” Zele said. “We knew we had to keep the ball out of the paint so we took a chance going into our zone, which forced more outside shots. In the fourth quarter, things started going Trinity’s way, shots started falling and we were fouling more but the girls held their own and continued to make every shot or drive contested.”

Lauren Snyder led the Hornets with 13 points and Julia Camino and Haley Coso also scored in double figures with 12 each.

Camino finished an impressive 10-for-10 at the free throw line. Kirtland finished 14-for-16 as a team.

Coso, one of Kirtland’s tallest players, stepped up to the challenge of playing against the bigger Trojans.

“I looked at Haley on the bench before she went in and I told her I need her best game,” Zele said. “She did exactly that. Haley is able to grab offensive rebounds and get put backs. Her teammates are also finding her in the paint and she is able to make a quick move to get to the rim.”

Reilly Greenlee added six points for the Hornets while Leah LaVerde and Macy McIntosh both contributed with four. Amber Yurick scored two points in the win.

Anna Ibos led Trinity with 10 points. Maciah Irving and Jaida Malone both scored seven for the Trojans, who dropped to 6-4, 4-1.