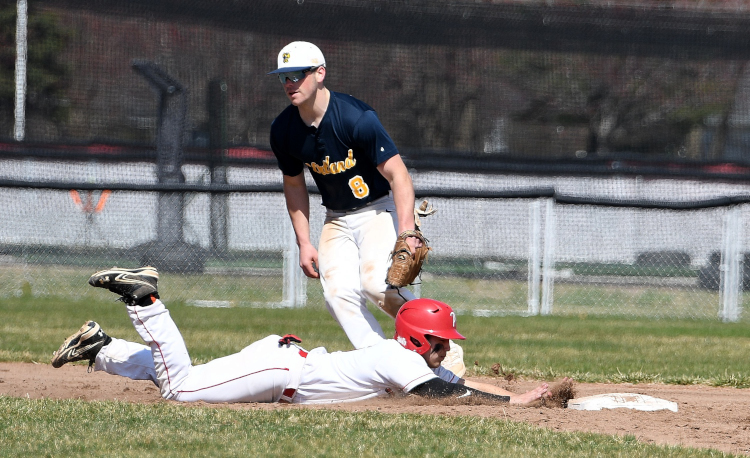 PERRY—Kirtland ace Mason Sullivan got off to a slow start in the first inning of a 4-2 non-conference loss at Perry in the season opener for both teams on Saturday.

Sullivan allowed four runs on five hits and he walked a pair as the Pirates jumped out to a 4-0 lead they never would relinquish.

Despite the loss, the Hornets were thrilled to be back on the field after a nearly two-year offseason.

“It’s just great to get out there and play again,” said Kirtland coach Luke Smrdel. “It was our first game out so we knew we were going to hit some bumps in the road. We haven’t been on a field for almost two years here. Little by little, we’ll get better each game. That’s the plan.”

Reese VanArnhem sparked the Hornets in the top of the first when he roped the first pitch of the game into left center and then stole second base.

Sullivan retired the first Perry hitter he faced but Isaiah Haas, Nathan Smith, Jake Ashton, and Ryan Andrikanich all singled before Sullivan would retire another Pirate.

Anthony Schultz would close out the Perry scoring with a two-out RBI single later in the first.

Sullivan would retire six of the next eight Perry batters he faced before reaching his max pitch count.

“The best part of it for me is Mason came out in the second and third innings and he was fine,” Smrdel said. “He got his composure back but we couldn’t score enough runs. That was the big thing. They brought in Smith and he’s one of the top pitchers in the area. That kid is very good. We couldn’t get anything going against him.”

Kirtland did score two runs in the top of the second off of Schultz, who started for Perry.

Adam Knaak and Gage Sullivan started that rally by drawing back-to-back walks. Both runners advanced a base on a defensive interference call and Knaak scored on Luke Chuko’s groundout. Andrew Spencer then grounded out to score Sullivan.

That’s all the Hornets would get as Smith limited Kirtland to just three baserunners the rest of the game.

Knaak singled in the fourth and Jonathan Withrow and Spencer both reached on an error later in the game.

“We’re down a few guys this week because of spring break,” Smrdel said of the offensive struggles. “By the end of the week, we’ll be getting some of these guys back. They’ll need to get a couple of games under their belts so it’s going to take a couple of weeks to get there but I think things will get going. It’s just a matter of time, more swings, and seeing more live pitching. Seeing the Smith kid was good. He’s definitely one of the better pitchers in the area. It’s definitely going to help us moving forward. We’re not going to see many better than him.”

Ashton led Perry with two hits and Schultz posted a team-best two runs batted in. Schultz also picked up the pitching win after allowing two earned runs on two hits in three innings of work. Smith struck out eight in four innings while not allowing a hit.

Kirtland hosts Crestwood on Monday while Perry hosts Chagrin Falls in the Chagrin Valley Conference opener for all four teams.