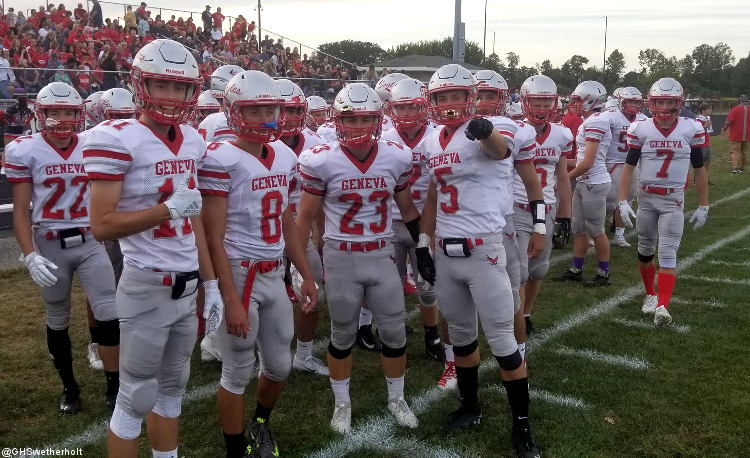 Charles Taylor’s one-yard touchdown run with seven seconds left in the game led Geneva to a 22-19 win at Madison on Friday.

The win was Geneva’s first at Madison since 1998.

“This game has been tight the last four years,” Geneva coach Chip Sorber said. “It’s been one point or a touchdown. Tonight, it was two heavyweights out there throwing haymakers at each other. They’ve got 22 seniors out there and we’ve got a good group too. The stands were packed. The environment was awesome.”

Madison struck first when Alex Dragas ran for a four-yard touchdown but Blake Peet tied the game with his 55-yard scoring run.

The Eagles took a 15-7 lead in the third quarter when Ben Scibona threw a 17-yard touchdown pass to Justin Way. Peet ran for the two-point conversion.

“Our quarterback has the ability to throw this year and he hit a touchdown pass,” Sorber said of Scibona, who threw for 60 yards in the game. “He was able to stretch the field a few times on those guys. We’ll take it. We’re a multi-faceted offense and we have a lot of guys that touch the ball. Tonight, it was basically that.”

Dragas threw a 25-yard touchdown pass to Marcell Welch to cut Geneva’s lead to 15-13 and Austin McCourt gave the Blue Streaks a 19-15 lead with his 13-yard touchdown run with four minutes left in the game.

The Eagles returned the ensuing kickoff to near midfield and Way ran for what the Eagles thought was a 38-yard touchdown. That score was erased by a holding penalty and the pressure mounted for the Eagles.

“We clocked the ball a couple of times to get the clock stopped but we got down where we needed to be and just jammed it in there,” Sorber said of Taylor’s game-winning plunge.

Geneva ran for 264 yards in the game.

“It’s a very diversified run game,” Sorber said. “Tonight, our halfbacks were big in the run game. They were running the jet and a few other plays because Madison worked hard to take our fullback game away and they kind of did. They slowed Charlie Taylor down and forced us to do some other things.”

With Taylor being limited to just 30 yards on 10 carries, Peet picked up the slack.

“People always expect Blake to make the big plays and tonight he did,” Sorber said. “He did a great job. He was explosive and tough to handle. I couldn’t be more pleased with him but that’s what we expect out of Blake.”