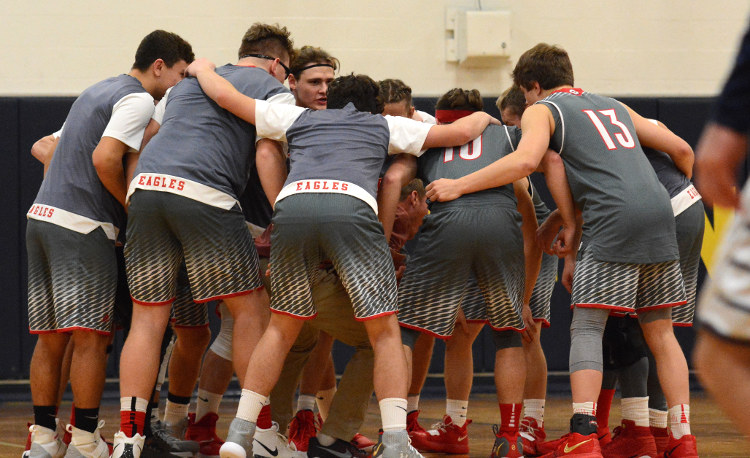 Sure, the sixth-seeded Geneva Eagles could be considered the Cinderella team of the Division II Lakeside District Tournament.

But, that wouldn’t be quite accurate, especially after an impressive win over No. 3 Harvey in a sectional championship game last week and more recently the Eagles’ 79-68 win over No. 2 Lake Catholic in Thursday’s district semifinals.

“That was an exciting night for us,” Geneva coach Eric Bowser said. “Geneva came out and supported us so well. The gym was rocking and the boys played so hard. It was a great win for us.”

Geneva’s upset win over Lake Catholic shouldn’t have come as a surprise as the Eagles have been playing their best basketball down the stretch.

They entered February with an 8-8 record but have been perfect since then. Thursday’s win was the team’s eighth straight.

“Early in the season, we had a lot of situations where it felt like we were trying to do too much and once they realized that if you move the basketball and wait for the right opportunities you can take good shots,” Bowser said. “The guys played hard and did the right things tonight.”

That balanced scoring has been consistent throughout Geneva’s winning streak.

The Eagles also have played solid defense and despite giving up 23 points to Luke Eller and 22 to Sean Fitzgerald, the Eagles did enough to keep Lake Catholic out of rhythm.

Varckette did an admirable job on Eller with support from several teammates.

“He’s one of our guys we know we can trust to lock down their guys,” Bowser said of Varckette. “When he needed some rest, Blake Peat jumped over on him for a little while and Brandon Smith spent some time on him. It’s a nice group of kids where we have some flexibility to do some of those things.”

Next up for the Eagles is top-seeded Villa Angela-St. Joseph, who ousted Perry on Wednesday, 59-54.

Tip-off is scheduled at Lakeside for Saturday at 4:00 p.m.

“We got the guys up there to watch them (on Wednesday),” Bowser said. “We got a pretty good look at what they do and what they did with Perry. Obviously, we’re going to have to find a way to stop the dribble penetration. We have to make sure we close out on shooters and size-wise, they’re bigger than us so we have to keep working in the post and keep making those doubles when it’s appropriate. The most important thing is to not turn the ball over. That was one of the best stats of the night for us. At halftime, we had only had three turnovers. That’s a number that we need to keep in check if we want to do well.”