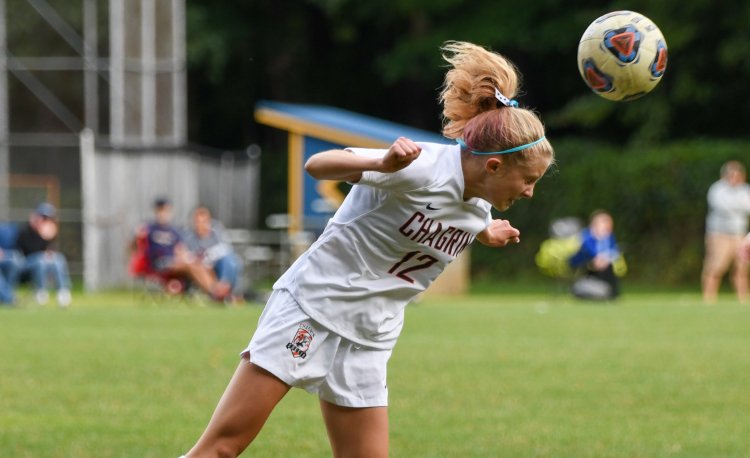 Sarah Burgess and Elana McGinness teamed up to score the golden goal in Chagrin Falls’ 2-1 double-overtime win over Kenston in a Division II regional semifinal at Ravenna on Tuesday.

Burgess scored the first goal of the game when she hooked a ball from right to left in the 56th minute and then assisted on the McGinness game-winner in the second overtime period.

“She missed one earlier in the first overtime and she was pretty upset about it,” said Chagrin Falls co-coach Pamela Malone of McGinness. “We basically said, you’re going to get another shot at it and you’re going to make it this time and she did. It was awesome.”

Kenston scored the equalizer in the 79th minute of regulation.

McGinnis, who missed several games this season due to an injury, had an opportunity to end in the game in the first overtime but couldn’t finish. She wasn’t about to let that happen again, so when Burgess sent the through ball up from midfield, McGinnis received the ball in stride, split a pair of defenders, and then slotted the ball past a diving keeper to end the game.

“Once I split the defenders and I was in front of them, I knew that I had a shot on goal and luckily it ended in the back of the net,” McGinnis said. “I was injured for a few games but recovered fast and it feels good to be back on the field and helping the team out.”

Chagrin Falls, who improved to 15-3-2, tied Kenston during the regular season, 2-2. The tie was just one of two blemishes on the Bombers’ record. They finished the regular season 14-0-2 and then won three straight playoff games before the Tigers ended their run.

“We felt like that wasn’t our best game,” Malone said of the regular-season matchup. “So, we really wanted to play them again and there was a lot of conversation about Kenston being undefeated and state-ranked, just things like that. We’re like, ‘Okay, we’re just going to take care of business on the field.”

Malone and co-coach Joe Ciuni prepared for the moment by beefing up an already challenging schedule.

Five of Chagrin Falls’ regular-season opponents won district titles and four of those teams are playing for a regional championship.

“I told the girls, we have eight teams tonight in the Sweet 16, eight teams that we either scrimmaged or had on our schedule,” Malone said. “We’re still playing tonight and we are here by design. We’re not here by accident, but on purpose. Joe and I went for the toughest schedule that we could make this fall. We hadn’t played Walsh Jesuit for years but we put Walsh on there. We put Magnificat on there and Avon and we scrimmaged Avon Lake. We just said we’re going to go for it and we’re playing for the second season, not the first season.”

That second season will continue on Saturday against Chagrin Valley Conference Chagrin Division rival West Geauga, a 2-1 winner over Copley in the other regional semifinal.

The Tigers and Wolverines tied in the regular season, 2-2.

Saturday’s regional championship game will be played at a time and location to be determined.