Kirtland surges to win over Berkshire 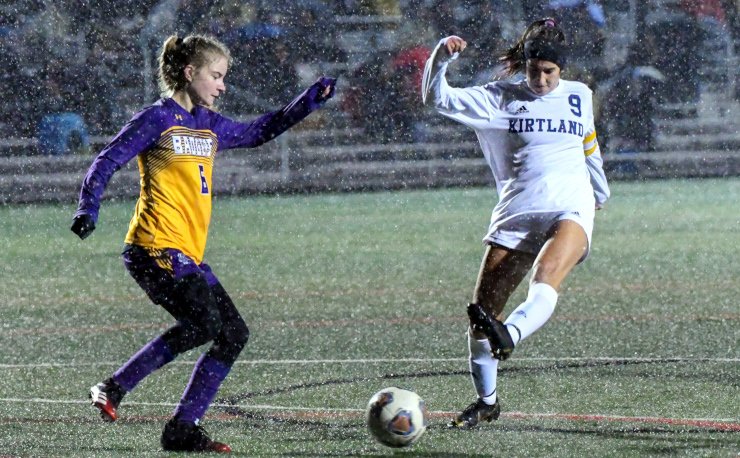 The second-half surge led the Hornets back to the regional championship game for the fifth straight season.

“Reaching the regional finals for the fifth straight year is a credit to our players, parents and coaches,” said Kirtland coach Ed Bradac.

Kirtland’s win over Berkshire was significant considering the two teams tied, 2-2, back on Sept. 21.

That game was played at Berkshire on a small grass field. The Hornets tend to thrive on a wider turf surface.

“We played them earlier in the year and it was a 2-2 game,” Bradac said. “We went back and watched that game and we felt that we probably could have done more to come away with a victory in that game, so we were fairly confident tonight. Right from the start, we wanted to attack them and that’s what we did.”

The Hornets earned their first corner kick just a minute into the game.

Giuliana Vladic served up a high arching ball and several Hornets got a touch on it before it was cleared by the Badger defense.

Kirtland and Berkshire both had other opportunities in the first half but neither team managed to take advantage of their chances and the game was scoreless at the break.

Senior Macy McIntosh changed that just over a minute into the second half when she headed in another Vladic corner kick for a 1-0 lead.

“We talked about the five-minute windows at the start of the game, at the end of half, and at the end of the game, whatever it might be, and we said, ‘Let’s try to get a goal in these first five minutes,’ and to their credit they did. After that, obviously, things calmed down a little bit more for us. We had the better possession and I was pleased with the results. I just think we made it a little bit harder on ourselves than we had to.”

Reining Division III Player of the Year Erika Zschuppe made it 2-0 seven minutes later when she converted a penalty kick after being tripped up in the box.

Sofia Huang closed out the scoring when she finished off a through ball from Zschuppe with about 10 minutes remaining in the game.

“After watching film, we wanted to put pressure on them so that their goalkeeper would have to handle the ball,” Bradac said. “That was definitely a strategy for us; let’s put them under pressure because we felt we would be able to score. It was just a matter of time.”

Three different players scored for the Hornets, which changes the way future opponents will mark up the Hornets.

“It was nice that the scoring was spread out amongst three different players tonight,” Bradac said. “Potentially, it could be Clare (Davidson), it could be Reilly (Greenlee), but tonight it was Macy and Sofia joining Erika. It’s important that we get different people to score in different situations. One was off the corner kick and one is off a penalty kick and the last one was in the flow of the game. Those are important goals for us.”

With the win, the Hornets improved to 14-3-3 overall and will play Chippewa on Saturday in a regional championship game at a time and location to be determined. Saturday’s game will be the fourth straight time Kirtland and Chippewa meet in the postseason and fifth time overall.