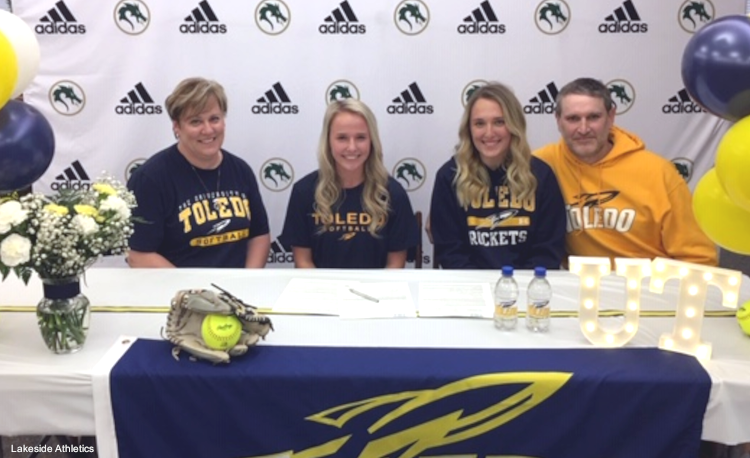 Lakeside senior Sidney Griffith on Wednesday realized a childhood dream when she signed a National Letter of Intent to continue her education and softball career at the University of Toledo.

“I reached one of my long-standing goals,” said Griffith of signing with the Rockets. “I dreamed about playing (Division I) since I was about seven years old. It was so exciting to sign today surrounded by my coaches, family and close friends. I am looking forward to competing in the (Mid-American Conference) in less than a year.”

The 2018 Ashtabula County Player of the Year, Griffith thought maybe she’d follow in her parents’ footsteps to attend Bowling Green.

Instead, she’ll study and play at the rival university.

“As I started my recruiting process, Toledo showed interest,” Griffith said. “It’s funny because my parents are BGSU alumni, so Toledo wasn’t even thought about because of the rivalry. Then I did some research on the University of Toledo and fell in love with everything about. It’s the perfect distance from home and has a great business program.”

Toledo began recruiting Griffith during the summer of 2019 when she was she was smashing home runs for her club team.

That spring, she batted .583 at Lakeside and hit a school-record 11 home runs. This summer, she hit 22 bombs.

“The summer of 2019, I do not believe that head coach Joe Abraham or his assistants ever missed a game of mine the entire summer,” Griffith said of the Rockets’ coaching staff. “Then on Sept. 1 of my junior year, coach Joe called to set up my visit. I have attended camps and games to meet the girls that I have mostly met through social media.”

Toledo recruited Griffith as a shortstop and she plans to be ready to compete.

“Toledo softball has a lot of talented girls on their team,” Griffith said. “The last time they got to compete, they were MAC champions. I am very excited to play alongside some of those girls.”

Before she heads to Toledo, Griffith has one more of softball with the Dragons.

First, due to the uncertainty surrounding COVID, Griffith just hopes to have a season. But, she’s got other goals she’ll chase this spring.

“My first goal of my senior season is to actually have a season due to COVID,” she said. “I missed out on my junior year. Some of my goals are to stay focused, improve every day and to improve my softball IQ every day, trying to make the most of my senior season no matter the circumstances, and always have fun.”

Griffith plans to major in Business Management at Toledo.