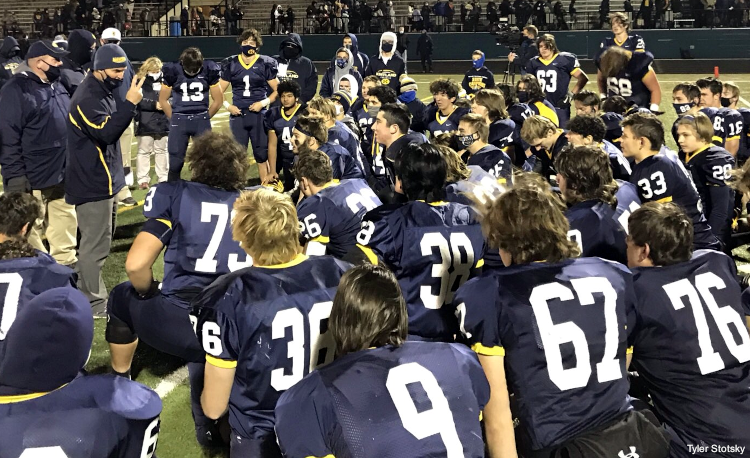 PARMA–For the better part of three quarters at Byers Field, the Kirtland Hornets and the Otsego Knights were in a close battle for a shot at the Division V title game next week. With the teams separated by one possession, all either team needed was one big play to shift the momentum.

Mason Sullivan and Anthony DeMarco delivered those key plays in the final 14 minutes as the Hornets went on to beat the Knights, 39-13.

“They put everybody in the box, and they blitzed, and they blitzed every play,” Kirtland coach Tiger LaVerde said. “You’ve just got to be patient, and you’ll get a big play. Mason hit one, then DeMarco hit one, and that was kind of the difference in the game.”

Sullivan had a 71-yard touchdown run and DeMarco followed with an 80-yard dash of his own, sealing the championship bid.

With the win, the Hornets advanced to the state championship game for the ninth time in 10 seasons and extended their winning streak to 40 straight contests.

“It’s exciting to get back to the title game, these kids worked through the whole season and took advantage of the opportunities given,” LaVerde said. “With what’s going on, we have been blessed to play this far into the season, and to give the seniors a last shot at playing.”

Kirtland bookended the scoring as they scored the first and last points of the game. Sullivan scored from four yards out and followed with a two-point conversion, two minutes into the game as Kirtland led 8-0.

Otsego responded with a 14-play, 70-yard drive as they cut the lead to one. Michael Gonzalez bounced into the end zone for a two-yard touchdown run. It was an 8-7 game with 4:15 left in the first quarter.

The Knights forced Kirtland to punt on their second drive, but Otsego’s next drive was short-lived. Danny Davidson came up with an interception, setting up Kirtland outside the red zone.

DeMarco quickly cashed in, scoring from 24 yards away and pushing the lead to eight points, 15-7 with 1:19 left in the first quarter.

The next Otsego drive pulled the Knights back into the game with a chance to tie. On an end-around play, Noah Dzierwa found Chase Helberg in the end zone for an eight-yard score. The two-point try was incomplete, making it 15-13 Kirtland with 9:29 left in the second quarter. Kirtland took that 15-13 lead into the locker room at halftime.

Mario Rodin opened the fourth quarter with a 33-yard field goal as Kirtland regained a two-score lead, 25-13 with 9:11 on the clock.

With another Otsego three and out, Kirtland was setup deep in its own territory. Three plays later, DeMarco iced the game with an 80-yard scamper, aided with a key block downfield by Joey Grazia. The Hornets held a 32-13 lead with 7:22 to go.

Ramon Lescano closed out the scoring with a 44-yard touchdown run in the final seconds.

“They [Otsego] are a really good football team, they were 10-0 for a reason,” LaVerde said. “We expected a dogfight being in the final four and I think we wore them down in the second half. The defense really hung in there throughout the second half, especially with the talent level of the quarterback and the offense. I’m immensely proud of them. After last week, we stressed be patient and don’t give up the big play on defense. They moved the ball a little bit in the first half but never got the big play.”

Kirtland tallied 498 total yards of offense, with 442 yards on the ground on 47 carries. DeMarco had a game-high 233 yards on 19 carries with two touchdowns. Sullivan went for 160 yards on 18 touches, scoring twice in the contest. Liam Powers completed 6-of-7 passes for 56 yards as Gage Sullivan was his top target, catching four passes for 33 yards.

Otsego’s rushing offense was slowed with the loss of depth at running back after losing their second-string back in the first half. The Knights managed 36 yards on 18 rushes. The passing offense accounted for 141 yards on 19 completed passes. Joseph Dzierwa went 18-of-33 with 133 yards, his brother Noah added the one passing touchdown.

The defense of Kirtland held Otsego to 38 yards on 23 plays in the second half and did not allow another point for the rest of the game. For an offense that averaged 36.5 points per game this year, Kirtland held them to 13 points overall.

Kirtland and Ironton will meet in a 2019 Division V Championship rematch next week at Fortress Obetz. Ironton was a 22-19 winner over St. Bernard Roger Bacon on Saturday. The two teams will battle it out on Saturday, Nov. 21 at 2:00 p.m.