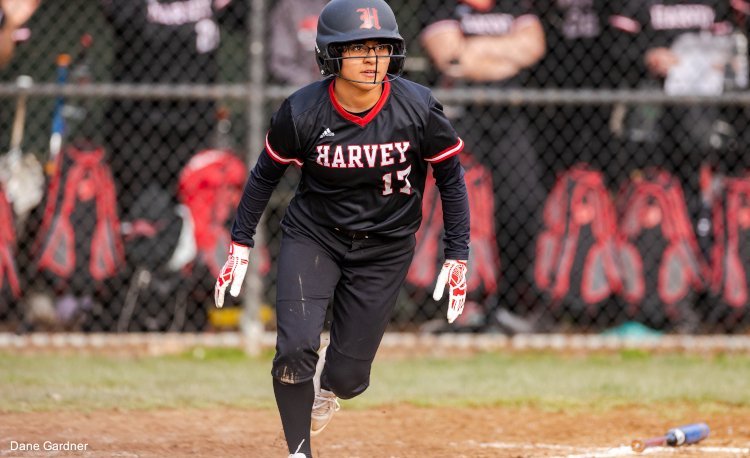 With the win, the Red Raiders improved to 11-1 overall and 6-0 in the Chagrin Valley Conference Chagrin Division. Harvey needs a win at Beachwood on Friday to earn a share of the league title and with a win over Hawken on Monday, the Red Raiders would win the conference outright.

“The bottom half of our order got the job done for us at the plate tonight,” said Harvey coach Betsy Hada. “Our 6-9 hitters went 8-for-15 and accounted for three of our runs and two RBI.”

Harvey led 2-0 early with single runs in both the third and fourth innings.

Alexa Bailey led off the Harvey third with a single and scored on Leah Miller’s two-out double.

Harvey pitcher Rachael Boykin retired Chagrin Falls in order in five of the first six innings and struck out the side twice.

The Tigers finally made their move in the bottom of the seventh inning down 2-0.

Peyton Pierce drew a leadoff walk, just the second baserunner Boykin allowed in the game. Camille Paoletta then hit a deep fly ball to left field and made her way home to tie the game at 2-2. Kendall Guddy singled later in the inning but Boykin struck out the next batter to force the extra inning.

Cortes drew a one-out walk in the eighth and Franklin followed with a single to put runners and first and second with one down. Cortes stole third and scored on an error. Thomas then hit a sacrifice fly to close out the scoring.

Caroline Reeder reached on an error to start the Chagrin Falls eighth but Boykin retired the next three batters to seal Harvey’s win.

Boykin allowed just two runs on three hits and struck out 15 in the eight-inning complete game.

“Rachael took command of the game from the first inning,” Hada said. “She struck out the first seven batters she faced. She got ahead in the count and stayed there. Rachael and fellow senior catcher Mira DiPierro (worked) well as a duo to set up each batter and shut down their offense.”

“When the pressure was on in the eighth inning, Diane Cortes drew a walk, Alyssia Franklin drove a hard-hit single up the middle, and Cortes proceeded to steal third and score on an error by the third baseman,” Hada said. “Lola Thomas came up with a big sacrifice fly to plate Franklin.”

Paoletta and Guddy had hits for the Tigers. Myers allowed three earned runs on 11 hits and struck out six.