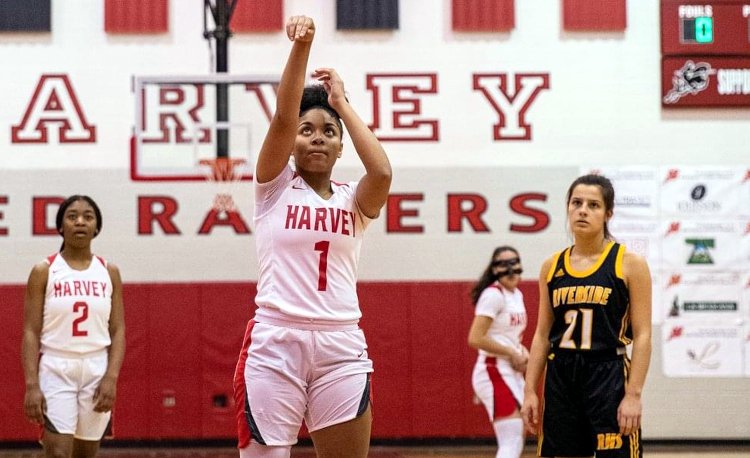 With three returning starters and several talented newcomers on the roster, the Harvey Red Raiders have set their sights on winning a league title this winter.

“I’m very confident about our chances to contend for a conference title this season,” said fourth-year head coach Jerimie Acree. “The core group of our program has worked hard during the offseason and I fully expect that to pay off this winter.”

The Red Raiders closed out last season with a 6-11 record overall and a 3-5 mark in the CVC Lake Division.

Harvey is deeper and more talented this season.

“Our team is extremely athletic and scrappy this year,” Acree said. “We look to pressure teams, which will allow us to turn the court over and get high percentage shots. Our team chemistry has improved a great deal and, as we all know, the closer a team is the better they perform.”

Harvey has two seniors and three juniors projected to start this season.

Senior Tamia Alston is a returning starter and classmate Stephanie Young has experience as she steps into the starting lineup.

“Tamia is a talented young lady who can get to the basket at will. Tamia has made it a point to work on her perimeter shooting in the offseason and we can already see improvement. We’re expecting a big season from Tamia this year,” Acree said. “Steph’s confidence is off the charts right now and it’s because of the work she’s put in during the offseason. The staff loves her mid-range shooting ability and expects Steph to be a major factor in our program this year.”

Thomas averaged 2.8 points, 3.6 rebounds, 2.5 assists, and 1.8 steals per game as a sophomore. McMullen was responsible for 4.8 points, 5.9 rebounds, 1.4 steals, and .8 blocks per game in earning honorable mention all-conference honors.

“Our team goes as Lola goes. Lola is a two-sport athlete who possesses a number of leadership characteristics needed to lead a team. Her court vision is as good as any player I’ve coached. Lola will be a major reason why our program has success this year,” Acree said. “Z is a player who fills up a stat sheet on both ends of the court. She plays way bigger than she is while having the ability to cause mismatch issues for opponents who prefer to play big. Z had a good AAU season and is ready to get after it this season.”

Junior Oyin Adio, a 5-foot-7 guard, earned second-team All-CVC Metro Division honors last season at Richmond Heights. She transferred to Harvey and is projected to round out the starting lineup.

“We’re so excited to have ‘O’ be a part of our program this year,” Acree said. “This young lady is extremely athletic and is a dual-threat as she’s able to get to the basket and shoot the 3-ball. O is also one of our best on-the-ball defenders as well and the staff expects her to help take our program to the next level.”

“Brooklyn was with us her ninth-grade year and ended up moving to Vegas these last couple years. We’re so excited to have her back as she adds depth to our backcourt. Brooklyn is a natural scorer and will surely help the team accomplish our goals this year,” Acree said. “Tashira has one of the best basketball minds and instincts in our program. She’s instant offense when she steps on the court due to her ability to shoot from the perimeter and play with her back to the basket.”

“Diamond is a physical presence in the paint that we’ve been needing the past couple of years. Diamond has worked on her game and looks to help our program on the boards and inside the paint this season,” Acree said. “Yonnis is figuring out that she’s talented and can play this game. We expect her to primarily help us on defense due to her length and athleticism. The staff is excited to see Yonnis develop her game throughout the season.”

“Ashia is an all-around player who has the athleticism, length and instincts to play at the next level,” Acree said. “We expect Ashia to take our program to the next level this year.”

“Cecilia has been fun to watch this offseason because her shooting mechanics have improved tremendously, which has increased her confidence. We expect Cece to continue to improve her game day in and day out,” Acree said. “Janel is a freshman but definitely doesn’t play like it. Her confidence paired with her ability shows our staff that the future is bright for this young lady.”

Harvey has set out to win the Lake Division this season, but that isn’t the only goal the Red Raiders have set this season.

They also hope to flip the results from last season and have a winning record this winter along with winning at least one postseason contest and, equally important, posting a team grade point average of 3.0 or better.

“In order to win, we must take care of the basketball by making great decisions night in and night out,” Acree said. “Also, we feel like we need to dictate the pace of the game, which plays to our strengths since we’re athletic and can get up and down the court pretty quickly.”