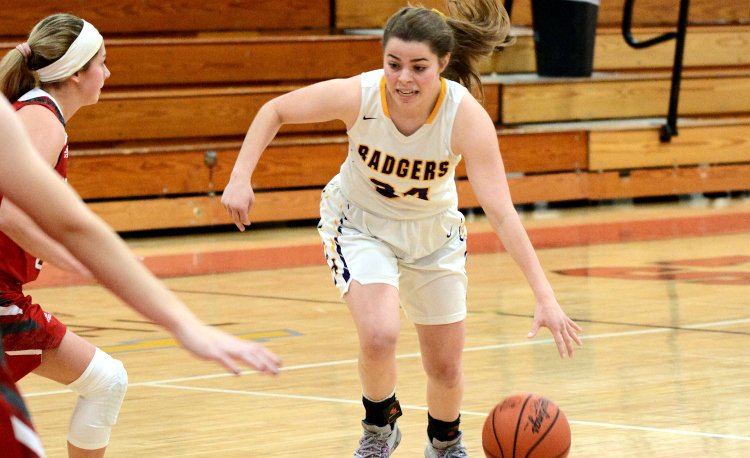 After last winter’s COVID-shortened season, the Berkshire Badgers are optimistic heading into a new season.

The Badgers, who finished last season with an 8-9 record overall and a 5-1 mark in conference play, return three starters and five others with varsity experience, leaving fourth-year head coach James Bosley confident his team is poised to achieve all its goals.

“After last year’s season and dealing with COVID restrictions, I’m confident any obstacles we face this year these girls are going to be able to conquer them. On the court, we just hope to stay injury-free,” Bosley said. “We had a really good summer so expectations are pretty high. Our energy and just overall excitement to be in the gym every day at practice is the best out of the four years I’ve been coaching here. Our team goal is always the same–win our conference. If we can do that, we set ourselves up to have a really good season and tournament run.”

Berkshire will lean heavily on four-year starter Lydia Kastor to spark the offense this season.

Through her junior season, Kastor is Berkshire’s all-time leader with 123 3-pointers made in her career. She is closing in on 1,000 career points and also could hit 200 assists and steals this season.

“Lydia is a very high IQ player,” Bosley said. “She understands the game and situations that are going to happen before they do. She is a stat sheet stuffer that can do everything on the court and focuses on what is going to help the team have success. She is an extension of the coaching staff on the court.”

“Kylie is one of the most unselfish players on the team,” Bosley said. “We wish she would look to score more but she has an old-school point guard pass-first mindset. She can play any position on the court and is willing to put the team first. Her biggest asset is that she is never satisfied with what is comfortable and is always trying to push outside of her comfort zone.”

“Maddy is our most well-rounded player,” Bosley said. “She does everything well and is going to be a hard matchup for teams I think. Like so many of our players, Maddy is always thinking team first.”

Junior Caroline Kuchling and sophomore Hayley Stoddard round out the projected starting lineup.

“Caroline is probably our most aggressive defender. She excels in frustrating the other team’s ball handlers by just being relentless on them. She embraces that role on the team, but this year she is going to show she is more than just a defensive player,” Bosley said. “Hayley is an ‘X-factor’ for us this year. She is a high-energy player that is going to be a problem for some teams to try and contain. She grew up a lot last year in the system and shows flashes of excellence all the time. She’s not a true post player even though that’s where she plays most of the time.”

“Kaylee is another girl that’s battled injuries the last couple of years. We are hoping she can stay healthy because she adds to the depth on our team,” Bosley said. “Faith is going to be a spark plug for us this year off the bench. When she gets into games she is going to bring a lot of energy because of how much she hustles.”

Ruchalski is a 5-foot-9 forward, Hering is a 5-foot-6 guard, and Wadsworth is a 5-foot-10 forward who averaged three points, four rebounds, and two steals per game in earning honorable mention all-conference honors.

“Brooke was one of our role players last year and she did a great job at that. She is going to take on an expanded role this year and we expect her to have more success with it,” Bosley said. “Natalie is primed to have a breakout season. She has been limited the last two seasons with injuries but we hope that’s behind her finally. Lanie is another of our girls that excels on the defensive end of the floor. She’s going to see her defensive role expand this year because with her size and speed can guard anyone.”

The Badgers have added even more competitive teams to their schedule this season to help prepare them for what they hope is a banner season capped by an extended postseason run.

“We have a difficult schedule this year, so if we can compete night in and night out we should be in contention to win the Valley Division of the CVC,” Bosley said. “We have to control the tempo of games. We are going to play fast so we will have to limit our mistakes while causing a lot of turnovers through our defense. Aside from that, we are slightly undersized so we have to focus on controlling rebounds.”

The Badgers certainly are in good hands with a well-rounded coaching staff that features Bosley and two others with head coaching experience. Assistant coaches Carla Richardson and Kim Triskett both ran programs at Newbury and Grand Valley, respectively.