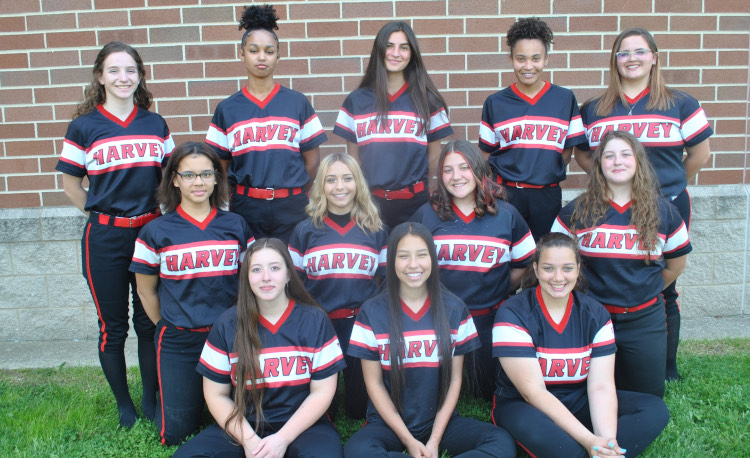 A 1997 graduate of the school, Hada played for the Red Raiders during the program’s heyday under former head coach Mike Scullin, who collected over 400 wins at the school, and her sister, Julie, played for Scullin on that 2002 squad.

The Red Raiders were dominant under Scullin and even made three straight regional appearances from 1984-1987. That success continued for over a decade but the program has struggled in recent years.

It’s Hada’s intention to rebuild the Red Raiders into one of the area’s—and hopefully, one of the state’s—top programs.

“We were one game away from going to regionals my senior year,” Hada said. “We were a force to be reckoned with in the 90s and it’s fun to bring that mentality back. I still talk to Mike Scullin all the time. That relationship meant a lot to me and I’m going to be that for my kids.”

Hada, who played collegiately at Heidelberg and then coached at her college alma mater, inherited a team in 2019 that had finished winless the previous season. The Red Raiders won seven games in Hada’s first year but, more importantly, they began to develop a new culture.

While COVID robbed the Red Raiders of their 2020 season, Hada continued her effort to change the mindset of each of her players.

Rebuilding is in her blood.

She finished just 5-33 in her first year as the head coach at Heidelberg but the squad went on to win 20 or more games in six of the next eight seasons. Hada led the team to the 2015 NCAA Super Regionals. During her tenure at Heidelberg, Hada coached one National Fastpitch Coaches Association All-American, 14 all-region players, and 24 all-conference honorees.

She’s approaching her new role at Harvey with the same focus and goals she used to turn the Heidelberg program into a consistent winner.

“I wanted to bring back the program to the way it was, the way Harvey used to be year after year after year,” she said. “A big part of it is just getting them to buy in and understand what it takes to be that championship team and sacrifice for it. I tell them all the time, you want to make your hometown proud and go out and give it all you have and leave it all on the field; I’ll carry you off, just do the right thing and go all out.”

It’s that part of the equation that has led to Harvey’s quick turnaround.

This spring, Harvey more than doubled its win total from 2019.

The Red Raiders finished the season 15-9 overall and 8-5 in league play. Harvey was 7-1 against other Chagrin Valley Conference Chagrin Division teams but just 1-4 against the Lake Division.

But, Harvey’s success was due to each girl holding the rope for her teammates.

“The one nice thing is it’s not the same kid every time,” Hada said. “Some people think you have to depend on the top of your lineup, but if the top is struggling, the bottom will step up and that’s when you’re going to have a championship team. The top of our lineup has been really tough. Alexa Bailey is our leadoff hitter and she does a great job of setting the table and getting on base. It’s hard for opponents to pitch around some of our hitters. You have Rachael Boykin and Mira and Lola in the next few spots.”

Several times this season, a different Red Raiders stepped up at the right time to deliver a clutch hit, or in the case of Mira DiPierro and Nya Talley, a game-winning walk-off hit.

Another key to Harvey’s success was pressuring an opponent’s defense.

When the Red Raiders walked or singled, they turned it into a double with 75 stolen bases this season.

“Speed kills and that’s what I said (when I took over the program),” Hada said. “Our speed is going to kill and put a lot of pressure on the defense. I’m big on putting pressure on the bases and I love having speed and getting things done any way you can.”

Harvey graduates three seniors—Tressa Overbey, Keristin Cruz, and Adrienne DiPierro—but the Red Raiders will return a solid core of players Hada expects to carry on with the progress the program has made.

“It’s kind of cliché but tradition never graduates,” Hada said. “We’re graduating Tressa, our center fielder, and then Adrienne and Kiersten, who have played some different roles for us in the infield, so those are going to be some shoes to fill but they’re pumped and ready to go. I think we have them on the right path to understanding how much it takes in the offseason.”

The Red Raiders will compete in a high school summer league and several players already have started their travel ball seasons.

Hada hopes that extra work will help the Red Raiders improve as players and teammates, and also understand the need for a short-term memory when chasing long-term goals.

“I tell them all the time, you did great today but that doesn’t matter anymore,” Hada said. “You had a great season, but what are you going to do next?”

Harvey’s success this season was certainly a team effort and Hada recognizes the importance her assistant coaches—Areli Martinez and Alli Luksic—played in the title run.

“My assistant coaches are amazing,” Hada said. “We wouldn’t be here without them. They do a great job and they do a great job developing the players. It was a well-oiled machine this year. My JV coaches really have taught the fundamentals and built the kids up. It’s going to be there.”