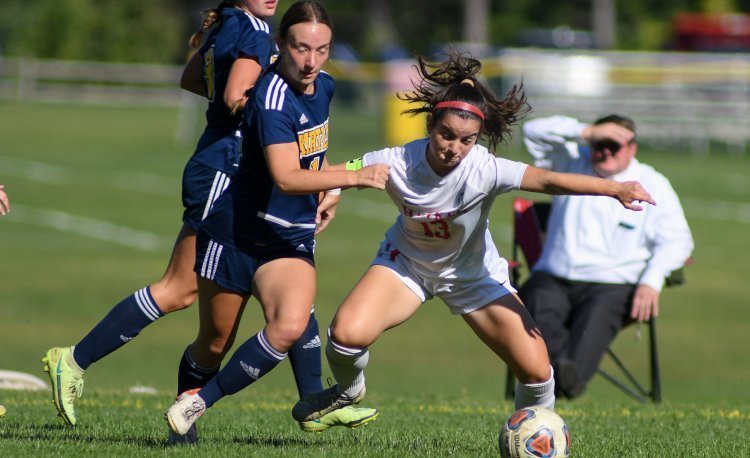 KIRTLAND—Hawken and Kirtland battled to a 2-2 draw in a Chagrin Valley Conference Chagrin Division showdown at Recreation Park on Thursday.

The Hawks struck first but Kirtland answered just a minute later as the game went into halftime tied 1-1. Hawken took a 2-1 lead early in the second half but again Kirtland quickly responded and neither team could score a decisive goal to break the tie.

Kayte Rourke gave the Hawks a 1-0 lead with 33:25 remaining in the first half when she picked up a through ball just outside the box and dribbled in and slotted the ball just past the outstretched arms of Kirtland keeper Emily Ridgeway.

The Hawks and Hornets spent the final 32 minutes of the half battling for possession and momentum.

Carmen Cicerini swung the momentum in Hawken’s favor when she scored just two minutes into the second half.

Again, the lead wouldn’t last long as Kennedy Boyd headed in her fourth goal of the season two minutes and 13 seconds later to close out the scoring.

“I was very proud and pleased with how our girls reacted once we got scored on,” Bradac said. “To be honest, I think as a young team we’ve learned a lot about our identity and who we’re going to be and that’s exciting.”

The tie was the second straight for the Hornets and Hawks, who also tied 2-2 last fall. Kirtland is now 3-12-5 against Hawken all-time with all three wins coming since the 2015 season.

“We still have to figure some things out but the nice thing is we’re playing 16 or 17 different girls, the most we’ve played with in a long time,” Bradac said. “We’re young, we only have three seniors, but I walk away from this game with a different feel.”

Hawken also had a reason for optimism following a 5-1 loss to Gilmour Academy on Tuesday.

“I think we’ve been working a lot on playing a full 80 (minutes),” said Hawken coach Heidi Wilbrandt. “We saw that against Gilmour, we had a really solid 60, but I think when we’re focusing on the little pieces and putting the little pieces together and trying to put all three lines together, when we talk about focusing and connecting and kind of taking care of your space and your line, one of these days, we’ll get all of the pieces firing. I was happy with our effort. We played a full 80 today.”

Hawken outshot Kirtland, 11-5, but the Hornets made the most of their opportunities.

“I think some of its focus, like they’re finishing on their set pieces, and I get that, especially when they have to punch above their weight class in a lot of different games,” Wilbrandt said about Kirtland’s ability to counter Hawken’s scoring. “Kirtland is a solid program and a solid team and you see the discipline in their set plays like that. I think it’s less focus and more of us just making sure that we’re tight marking or we’re going with our girl in that first step. I think those little pieces from the soccer side of things are things we can clean up. We have a small squad, I play 12 or 13 on a regular basis, so some of it is fitness and some of it is just trying to stay healthy and preserve ourselves.”