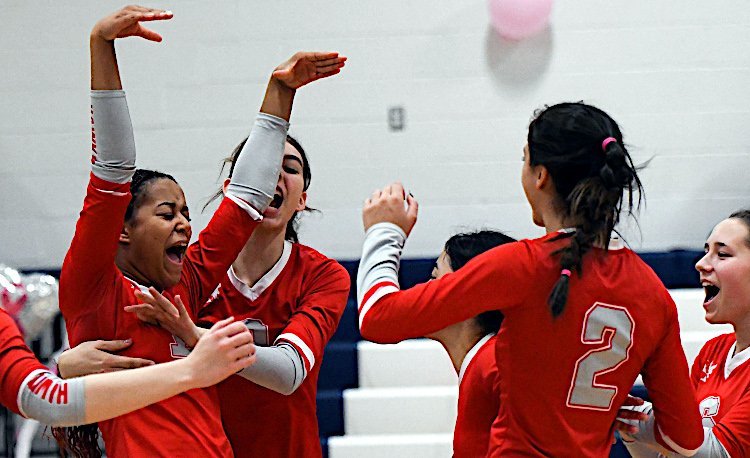 Hawken’s long wait is over.

It took 38 years, but the Hawks finally soared above the competition to win their first Chagrin Valley Conference title since 1984.

“Northeast Ohio volleyball is nuts. I think for many of our kids, knowing that right down the road we have NDCLs and our Gilmours, but to be able to take away a conference championship and put Hawken somewhere up there and be part of that, we’re going to take any moment of success that we can get,” said Hawken coach Patty Hace. “West Geauga is a great, competitive team. This was not an easy feat. We have some great competitors in the CVC overall so it’s been fun to stay within this conference and to compete and walk away with a title.”

The Hawks entered the match 6-0 in league play with two matches remaining. West Geauga was 6-1 with its lone loss coming at Hawken earlier this season. A West Geauga win would have earned the Wolverines at least a share of the Chagrin Division title.

The Hawks rallied from a six-point deficit to win the first set and then took control of the second early in the set and cruised to a 2-0 lead.

“Fun has been the theme of this season and this has been such a fun team to watch,” Hace said. “It’s been a fun group of kids and I’m just beyond proud to have this as sort of a milestone for them and the way they played this season.”

West Geauga wasn’t ready to concede the match or the title to Hawken and rallied in the third set to keep their title hopes alive.

The Wolverines led in the fourth set, 22-20, but Hawken scored the final five points to seal their first conference championship in nearly 40 years.

“We were in quicksand,” said West Geauga coach Amber Baker. “We were a day late and a dollar short on coverage. They just nickeled and dimed us in the center. We didn’t take away what we needed to in the middle. I thought in the first set we were actually stronger than them and they still ended up pulling away. I thought we were going to take that first set and I think that was kind of a blow to our ego and we really lost momentum.”

West Geauga played without standout middle Kayla Herbst and her absence affected the Wolverines and their ability to defend the middle.

Even after pulling out the third set, the Wolverines didn’t have an answer for Hawken’s Emily Monachino, who posted a match-high 19 kills.

Hawken scored seven of the final eight points to win the match.

“I told the kids they have to trust their teammates,” Hace said of Hawken’s ability to finish off the match. “It’s a loud gym and a loud atmosphere ad at that point, you have to rely on five other people on the court. For many of them, it was just taking a deep breath and resetting to have composure in that moment.”

Last year, Hawken fell short far too often in those clutch situations, but a year of experience has paid dividends for the Hawks.

“I’m lucky only having one senior graduate last year,” Hace said. “We learned those moments the hard way last year with West G being one of them. We lost to Edgewood last year as well and our kids learned from it and wanted to capitalize this year. They know being down by five, six, or seven points, they know they can come back because they’ve seen it happen by other teams, so why not us? I think it was more of a gut check.”

Molly Jared contributed to the win with 14 kills.

With the win, Hawken improved to 18-1 on the year and will close out league play at Chagrin Falls on Thursday.

West Geauga dropped to 13-7 but despite the loss, the Wolverines gained a bit of confidence heading into the postseason.

“We had the fight and we just would not give up,” Baker said. “We took a set from Perry and Hawken did not, so that was a huge confidence booster for our case. Anybody can win on any given day, so you have to go out there and give it everything you have on every single play and that’s hard to do. When you’re a couple of sets down and you come back, that shows a lot of grit and a lot of heart, and that’s what I’m looking forward to in the future for our program.”