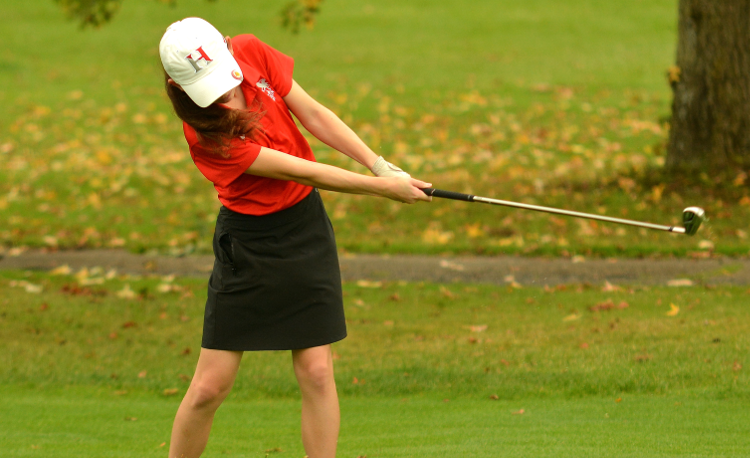 Hawken sophomore Ella Wong prepared herself for the 11th hole at Canterbury Golf Club the same way she approached every previous hold she has played in her golf career.

With its swirling winds and bunker-protected green, Canterbury No. 11 challenges even the most skilled golfers.

Wong pulled the eight iron out of her golf bag and lined up her 116-yard tee shot hoping to plant her ball near the pin to set herself up for a birdie putt on the downward sloping green.

A smooth swing led to a near-perfect strike.

The ball landed just a few feet past the hole and slowly rolled toward the hole. From her vantage point, Wong thought she’d finish off the hole with a short birdie putt.

“I initially thought it was going to roll over the green,” Wong said of her eight-iron shot. “However, the green sloped from back to front and I saw my ball begin to roll back toward the hole. From the tee box, I thought my ball stopped a foot from the hole, but when I approached the green, I did not see it. I finally looked in the hole and saw my ball. I was shocked and extremely excited to discover that I had achieved my first hole-in-one.”

The hole-in-one has been just one highlight of Wong’s summer.

The reigning Chagrin Valley Conference MVP, who placed 17th at the OHSAA state golf tournament last fall, Wong picked up this summer right where she left off in Columbus.

Already she has North Coast Junior Golf Tour wins at Manakiki, Solon and Punderson and she finished second at Pine Ridge.

“I have been pleased with most of my scores this summer, but I have been disappointed with my chipping,” Wong said. “Compared to my performance last summer, I have been hitting more greens in regulation, which improves my chance to par.”

She defeated Beaumont’s Lauren Bangasser for the second straight season to win the title.

“During my final match, heavy rain and flooding of the course required suspension of play for approximately 30 minutes,” Wong said. “It was especially gratifying to be able to overcome this adversity and win.”

Bangasser won the first hole but Wong claimed the next three to take a 2-up lead. With the match tied after 12 holes, Wong again strung together three straight hole wins to close out the match.

“Having played against her in this event last year, I knew that she would be a tough competitor,” Wong said of her opponent. “This helped me focus on my game to minimize error. Last year in this event, I was 3-down after nine, and I was determined not to be in that situation again. This year, I was 3-up after the 16th hole to win the championship.”

While COVID-19 shortened the summer season and changed how players compete on the course, Wong has adjusted nicely and is looking forward to closing out the summer tour.

“Unfortunately, due to COVID-19, my summer season has been shortened, as the first three tournaments were canceled,” she said. “Currently, I compete in tournaments twice a week on the North Coast Junior Tour. My next tournament is a two-day invitational at Sand Ridge Golf Club on July 6-7. Recently, I also learned that my high school team will be playing in the Ohio Girls Golf Foundation tournament at Avon Oaks Country Club in a few weeks. I am looking forward to this event because it is a course I have not yet played, and I will be competing against girls outside of my conference.”

She hopes her off-season works leads to an improved performance this fall as she gears up for another run at the state tournament.

“This upcoming season, my goal is to consistently shoot below 78 during tournament play,” she said. “To accomplish this goal, I will work to avoid three-putts and double bogeys. I also hope to qualify for the state tournament with my team this year and improve upon my 17th place finish.”

Wong currently is ranked first in the NCJT 19 & Under division with an average score of 80.5 in five events.