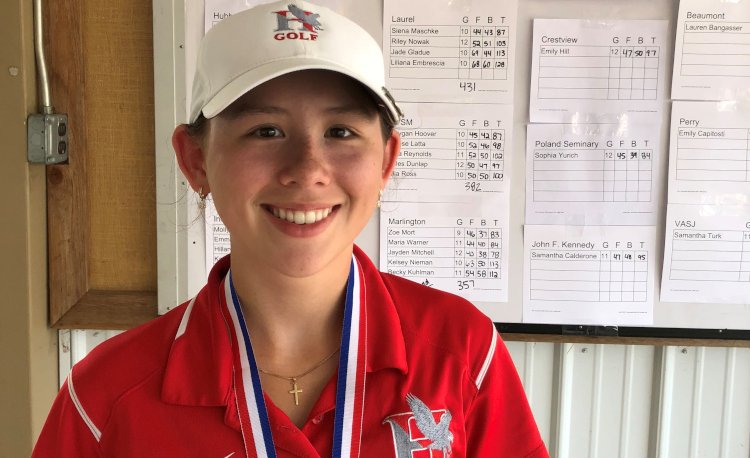 Hawken’s Ella Wong is headed back to the state tournament for the third time after winning the Division II Sable Creek District on Wednesday.

Wong, who tied for the district title last season and finished third as a freshman, shot a tournament-low 73 to win by four strokes.

“It is very exciting to have won the district tournament this year because over the past three years I have been able to lower my score at Sable Creek,” Wong said. “My freshman year, I shot 77, 75 sophomore year, and posted 73 today.”

Sable Creek is one of the most challenging district courses in the state and even Wong had her problems on the course.

“Sable Creek is challenging due to its narrow fairways and tight shots,” she said. “Initially, I struggled off the tee box because I was hitting my driver right, and to overcome this challenge, I began using my 5-wood on shorter holes. Additionally, the par 3 yardages were longer, and I missed the greens on most of these holes, but my short game allowed me to still save par. I remained focused by playing one hole at a time and not dwelling on my previous outcome, good or bad.”

Off the tee box, Wong struggled but she made up for it with her putting.

“I made two long birdie putts which helped me to recover from a double bogey,” she said.

Last fall, Wong placed eighth at the state tournament. Six of the top 8 finishers have since graduated, leaving Wong as one of the top returning players.

But, she knows nothing will be handed to her and she’s going to have to be laser-focused to win the state title.

She’s heading into her third state tournament in the right frame of mind.

“My prior experiences at the state tournament allow me to feel more relaxed and confident heading into this year’s competition as I am more familiar with the course and tournament format,” she said.

Independence’s girls’ team will make its fourth trip to the state tournament since the program was founded in 2014.

The Blue Devils finished third as a team to earn its state berth.

Hillary Esper led the Blue Devils with an 89, Emma Konopa and Molly McGreal both shot a 90, and Kate Coljohn rounded out the scoring with a 104.

The Blue Devils finished fifth as a team at state last year but graduated their top three golfers.

“The story this year is that we graduated our No. 1, No. 2, and No. 3 girls in a school that has about 40 girls per grade, in a school that has a tremendous volleyball program, a very competitive soccer program, and a solid cross country program, and somehow, someway, these girls come out and produce,” said Independence coach Karl Schuld. “It amazes me at how successful not only is our girls’ golf program but across the board how successful Independence is in girls’ sports. It’s insane.”

Qualifiers: Top 3 teams and 3 individuals not on a qualifying team.