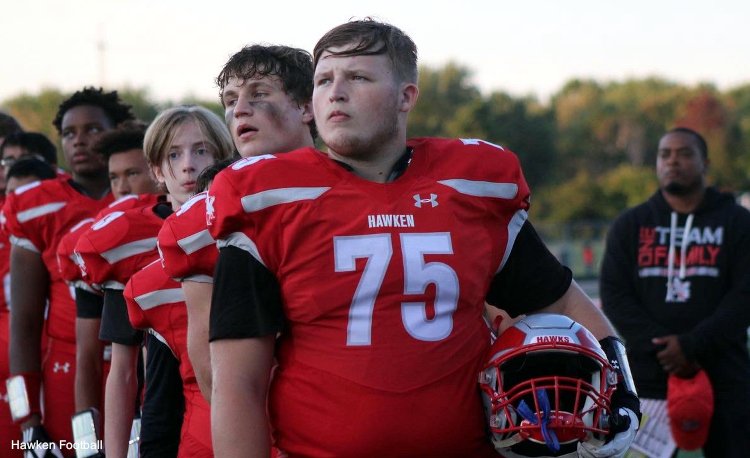 BEREA—No. 15 Hawken threatened No. 2 Villa Angela-St. Joseph but in the end, the Hawks didn’t have enough firepower and fell to the Vikings in a Division IV, Region 13 first-round game at Finnie Stadium, 44-21.

Hawken played without senior quarterback Terrence Robinson II, a dynamic player and team leader, and without several other key players leaving the Hawks thin across the board.

“We did have some unfortunate injuries in the past couple of weeks, but our kids came and fought,” said Hawken coach Brian Stephenson. “We told them, ‘Look, we’re going to try to slow it down and grind this one out,’ and we just came up a few plays short tonight.”

Conversely, VASJ, who came into the game ranked ninth overall in Division IV, looked sharp from the jump, marching down the field on its opening possession via a mix of long, physical runs from bruising running back Ty Howard and quarterback Jaylen Minter, who scored the game’s first touchdown on a 55-yard keeper mere minutes into the game.

For what it’s worth, Hawken’s first possession started off well enough as converted right tackle now starting quarterback Chris Shea moved the chains early, but pressure from a blitz-happy Viking front quickly derailed that effort and VASJ took over once again after a Hawken punt.

VASJ strung together a long drive into the Hawken red zone, yet the Hawks’ defense stood strong this time, turning away an early 4th-and-6 attempt when Dom Johnson made a diving stop a couple of yards shy of the line to gain on Viking running back Amani Powell.

Hawken took over from there, and a nice throw up the seam from Shea to tight end A.J. Sands got the Hawks offense moving in the right direction before a broken play that led to a sack of Shea ended up sinking the series.

The Vikings would get the ball back and quickly converted via a long touchdown run from Powell, giving VASJ an early two-possession lead, 14-0, to start the second quarter. Soon thereafter, Minter plunged in from 18 yards out for his second rushing score of the half to push VASJ’s lead to three possessions.

The Hawks would eventually strike back. A couple of timely runs and receptions from Johnson got the offense deep into VASJ territory early in the second, and an 18-yard touchdown connection on a fade route from Shea to leaping senior receiver Jordan Harrison cut the lead to 21-7.

The shifty and skilled VASJ tailback Powell would find pay dirt yet again, sauntering in over right guard from six yards out to make it 28-7 with 8:23 left in the half. His backfield mate, Lavonte Thornton, soon followed, plunging in from 11 yards out a handful of minutes later, and then a safety right before the halftime clock expired sent it to the break with VASJ leading 37-7.

The second half was played under a continuously running game clock due to the 30-point deficit.

Powell recorded the hat trick when he added another rushing touchdown for VASJ from five yards out halfway through the quarter to make it 44-7.

Hawken was down, but not out.

Sands, the Hawk’s captain and two-way senior leader, would fittingly contribute Hawken’s final two scoring plays of the season, the first early into the fourth quarter on a nifty 62-yard catch and run through the Viking secondary, and another midway through when he ran in from nine yards out via a catch in the flat from Shea, his third TD pass of the night that closed out the scoring.

Bright spots on the night for Hawken included tenacious efforts from Johnson and Sands on both sides of the ball, as well as a handful of nice throws from Shea, a junior who could hold some promise for the up-and-coming program in the days ahead.

“As we told our kids, the way that they battled, that’s how you battle in playoff football,” Stephenson said. “But now we learn. We’ve got a young group and we bring a lot back next year so for us, this is a great experience, and we’ll take it into the offseason and hope to build upon it.”

Matthew Grassi
Grassi, a 2010 Cleveland State University graduate, is a former Northern Michigan sports editor that has spent the last decade covering agriculture and agriculture technology for various B2B publishing companies around the Cleveland area. A Painesville native, he played varsity football and ran track at Riverside High School and played a year of DIII college football at Heidelberg College in Tiffin, Ohio. He’s an avid Cleveland Browns fan and a devoted dynasty fantasy football and sports gambling enthusiast, and he still plays basketball with a group of high school friends every morning on the far eastside.