West Geauga’s season comes to an end at Streetsboro 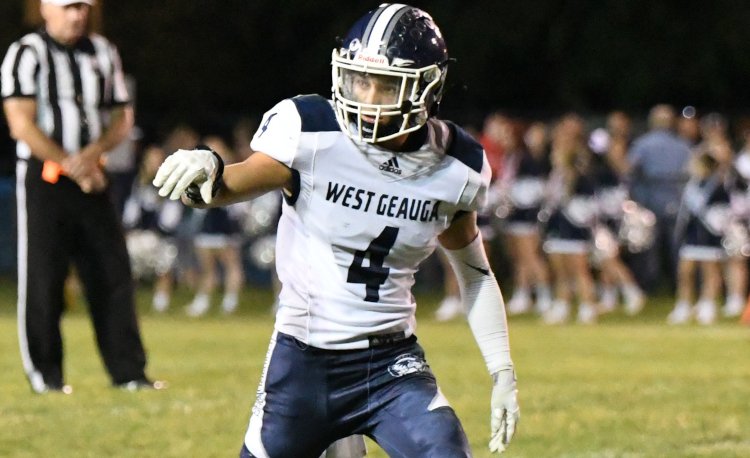 STREETSBORO–A matchup nine weeks in the making turned into a shootout as Streetsboro outlasted visiting West Geauga in a Division III, Region 9 playoff game on Friday, 56-42.

West Geauga and Streetsboro were due to play in Week 2 but that game got canceled due to COVID.

The ninth-seeded Wolverines, who closed out their season with a 7-4 record, did their best to match up with the talented Rockets but came up short in their upset bid.

“For our guys to just come out and fight, it just warms my heart,” said West Geauga coach Adam Sopkovich. “As long as I have my guys, they have my back, I have theirs, we are fine.”

The Wolverines responded with a David Fofana touchdown run, set up by a 45-yard pass play.

Streetsboro regained the lead on a Preston Hopperton touchdown but the Wolverines wouldn’t go quietly.

Danny Stewart completed a pass to Chris Ranallo, who plucked the ball out of the air, shed a tackle, and then tied the score at 14-14.

Hopperton added a five-yard touchdown run to give the Rockets a 20-14 lead with 5:37 left in the first half.

Klimak added a second touchdown run and then picked off a pass and then threw a 50-yard touchdown pass to Hopperton, who leaped over two defenders to make the catch.

“That huge play to me gave us all the momentum, especially coming out of the half,” Klimak said. “We just said with three seconds left, let’s throw it up in the end zone.”

West Geauga was down but not out.

Streetsboro’s offense continued to roll as Hopperton responded with a touchdown and then, after a West Geauga three-and-out, Klimak threw a touchdown pass to Colby Benjamin to push the lead to 48-21 with 3:00 left in the third.

West Geauga scored 14 unanswered points on a pair of touchdown passes from Stewart to Ranallo and Ty Bose, to pull to within 48-35.

“I’m happy for the kids, especially our seniors, their great careers continue, and offensive execution was high tonight,” said Streetsboro coach Pete Thompson. “We got a big splash play to end the half; Preston made a great adjustment and was in the end zone.”