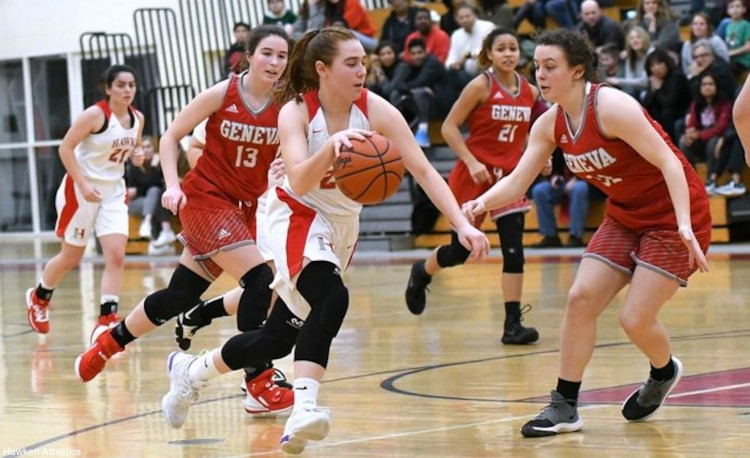 Like nearly every other team across the country, Hawken’s girls’ basketball team is eager to hit the court.

Sure, the Hawks just want to play, but with four returning starters, fifth-year head coach David Murray and his players have plenty of reasons to be optimistic about the 2020-2021 season.

“Based on our first few weeks of practice, I’m extremely excited about our team this year,” Murray said. “The number one thing that stands out is the collective level of competitiveness. We have a motivated group of athletes who go out and push each other every day, whether it’s on the court or in the weight room.”

While the Hawks are talented, their strengths lie in the intangibles.

“Two of our team’s greatest strengths thus far have been our mindset and hustle,” Murray said. “We talk a lot about focusing on the things that you can control and not worrying about extraneous influences. Our team has done a great job of committing to this mindset and showing up ready to work every day. Another strength has been our hustle. You can compensate for a lot of minor mistakes if you’re able to consistently outwork and outhustle your opponent.”

Among the returning starters from last year are three who earned All-CVC honors including Makayla White, a 5-foot-10 junior forward.

White, who was named second-team All-CVC and the team’s Offensive MVP, averaged 13.5 points, 8.3 rebounds and 2.2 steals per game.

“It is impossible to capture all of the ways in which Makayla contributes to our program,” Murray said. “She is, without a doubt, one of the hardest workers and fiercest competitors I have been blessed to coach. Her mindset and the dedication with which she approaches everything in her life is an inspiration to those around her.”

“Gabi is an outstanding leader both on and off of the court,” Murray said. “Her team-first mentality has been crucial in laying the foundation for the team culture that we are working to establish.”

“Julianna embodies all of the qualities of a quintessential point guard,” Murray said. “She is selfless, mentally and physically tough, and possesses a high basketball IQ. Her tenacity on the court catalyzes what we are looking to accomplish both offensively and defensively.”

Kate Bollinger and Carmen Courtad are expected to round out the projected starting lineup.

Bollinger, a 5-foot-8 sophomore forward, averaged 2.6 points and 3.6 rebounds per game last year while Courtad, a 5-foot-7 sophomore guard and returning starter, dropped in 4.1 points with 3.0 rebounds and 1.7 steals per game.

“After a strong season as a freshman, we’re looking for Kate to make a big contribution this year. She put in a tremendous amount of work during the offseason and it has paid dividends,” Murray said. “Carmen’s greatest assets are her court-awareness and understanding of the game of basketball. She’s a highly skilled player who has a knack for anticipating how a possession is going to unfold and putting herself in the right position.”

Junior guard Maya Dori finished as Hawken’s second-leading scorer last season but was injured in the team’s final game of the year.

The 5-foot-5 guard, who averaged 8.5 points, 4.3 rebounds and 1.4 steals per game, will provide quality depth for the Hawks.

“After an outstanding sophomore year, during which she was our team’s second-leading scorer, Maya suffered a tough injury in our final game of the season,” Murray said. “The dedication and resiliency that she has shown throughout the rehab process is a testament to her character as an athlete.”

For the Hawks to be successful this season, they’ll first have to handle the uncertainty this season is sure to present.

“To be honest, I think that our greatest challenge right now is the same thing that’s facing every team in the country,” Murray said. “We’re in a situation where we’re surrounded by uncertainty. A key determining factor for every team this year, no matter the level, is whether everyone can come together and draw support from one another. I think that if we’re able to achieve that, we’re going to emerge much stronger from this experience.”

On the court, the Hawks will look to pressure opponents while also maintaining their composure on the offensive end.

“Our number one goal is continuing to establish a team-first culture based on mutual accountability. If we are able to buy-in to the mindset required to achieve this goal, everything else will take care of itself,” Murray said. “I think that one of the biggest keys to a successful season for our team will be how we handle pressure and whether we are able to apply pressure on the defensive end.”