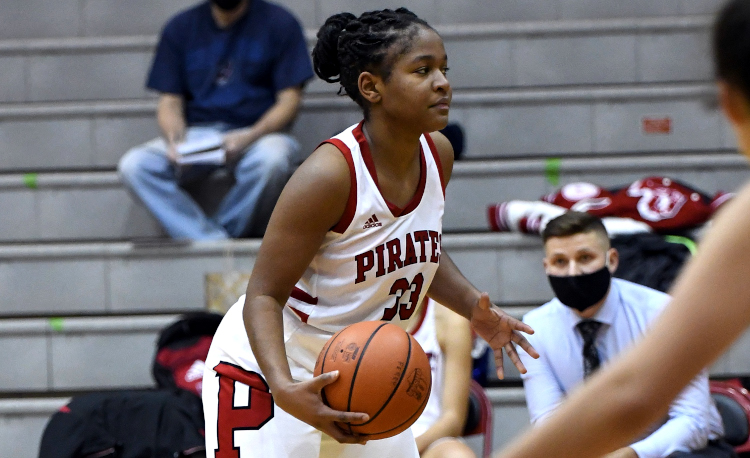 Perry and Gilmour Academy over the past few seasons have developed quite a rivalry.

The Pirates ended Gilmour’s season in both 2019 and 2020 while the Lancers knocked the Pirates out of the playoffs in 2018.

On Saturday, Perry made a statement with a 49-44 win at Gilmour.

“I think that made a big difference in knowing that we have a history with them and simply knowing that they’re in our district,” said Perry coach Roy Infalvi. “When it comes down to the end of the year, the game means a little bit more when it comes to seeding and positioning for the tournament. I think that played into it but what really played into it is they’re a really good program and it’s a big game on our schedule for us. The girls came out and played well.”

The Pirates, who improved to 5-0, got off to a hot start thanks to Madyson Hacking and Elle Infalvi.

Hacking, who finished with a team-high 17 points, drained a pair of early 3-pointers and finished the first quarter with eight points. Infalvi scored all eight of her points in the opening quarter as the Pirates built a 22-11 lead.

Perry maintained its 11-point advantage to lead at halftime, 35-24.

“I was really happy with the way we came out and started the game,” Coach Infalvi said. “We had great energy; we did really well with our press and created some turnovers and executed well in transition. We passed the ball well and defensively, played really well too.”

Gilmour made some defensive adjustments at halftime that limited Perry to just 14 points in the second half.

“In the second half, I don’t think our effort or intensity changed at all,” Coach Infalvi said. “We did get a little bit sloppy offensively against some of their trapping and then we also didn’t finish around the rim as well, but on the defensive end, we still played well and were able to hang on and finish it off.”

“Elle and Madyson had a good first half and in the second half, Gilmour did some different things defensively to try to make sure they weren’t getting anything open,” Coach Infalvi said. “I thought a lot of our other girls did a good job of stepping up and hitting some big shots at big times. Even though there weren’t a lot of them, they made them when they counted.”

Anderson keyed the Pirates on the defensive end and McKoon also pulled down some key rebounds.

“All our girls left it out on the court,” Coach Infalvi said. “They have two girls that really do a good job inside in (Cooper) Flowers and (Lauryn) Stover, and JC was physical inside and got some big rebounds. Sophia Makad too was in there and got some big rebounds. Even some other girls, Izzy McKoon, who is not really big, but she’s physical and gets in there and did some good things defensively to really help us.”

The Pirates have now won two straight over the Lancers dating back to last season’s district semifinals and are 3-2 against Gilmour since the 2017-2018 season.