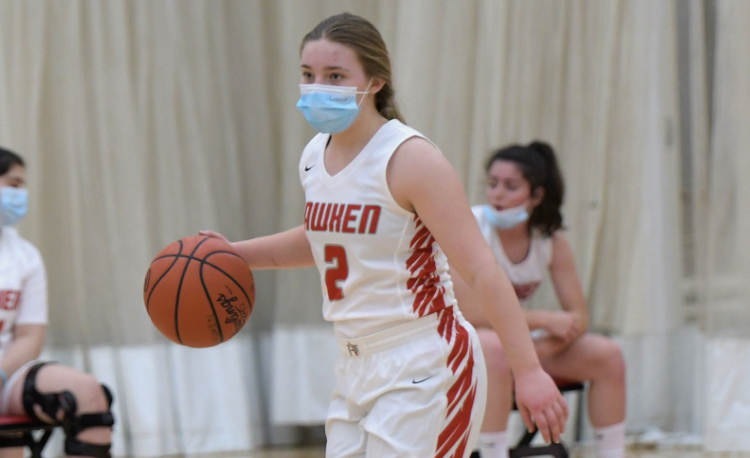 Prior to the season, Hawken was considered a longshot to win the Chagrin Valley Conference Chagrin Division title.

Both West Geauga and Chagrin Falls were ranked above the Hawks but two months—and a long pause—later, the Hawks are 4-0 in conference play with big wins over both the Wolverines and Tigers and riding an eight-game winning streak.

“It’s really exciting,” said Hawken coach David Murray of his team’s run of success. “I think that what really magnifies it is really, like a lot of schools, we didn’t know if we’d get the opportunity to play any games, so being afforded the opportunity to go out and compete is a victory right there. To be able to have some success thus far, it’s really nice. It’s nice to see the girls go out there and competing together and see things start to jell.”

Hawken opened the season with a 1-2 record following losses to Kirtland and Gilmour Academy and a win over Maple Heights.

A 37-32 win over Chagrin Falls on Jan. 6 provided the Hawks with some momentum they haven’t let fade away.

Wins over Beachwood, VASJ, Lakeside, and Harvey followed, which set up a key showdown with West Geauga.

Hawken entered the game 6-2 while the Wolverines were 3-1.

The Hawks pulled away from the Wolverines in the second half but West Geauga rallied back to force overtime.

Hawken followed up that big win with victories over Lake Catholic and Orange and now enters the final week of the regular season with a 9-2 record.

“The key is the mindset and the resiliency of our girls,” said Murray of the eight-game winning streak. “This season has been difficult, with all we’re going through, but I know that the coaches draw a lot of inspiration from their attitude. Even when we weren’t playing games they were coming into the gym every day just ready to get after it. There was a point where we actually went to them, maybe the third or fourth week we were shut down, and we asked our captains if they wanted to scale it down to just a couple of days where we were practicing or lifting. They said, ‘No, coach, we want to practice as much as possible because this is the opportunity we have to spend with our friends.’ I give them all the credit for the way they’ve bonded together this season. They’ve been awesome.”

The biggest key for Hawken this season has been the team’s ability to spread the wealth. There isn’t one player who carries the team.

Hawken averages 53.5 points per game with six players who average five or more points per contest.

Hawken’s defense is just as balanced as seven players average at least 3.0 rebounds per contest and three players have at least two steals per game.

“We have a really good, strong senior leadership group, but I think what’s been different in terms of the dynamic this year is that it hasn’t necessarily been one or two individuals,” Murray said. “It’s been the collective buy-in that has made the biggest difference for us.”

Despite the big wins over Chagrin Falls, West Geauga, Lake Catholic, and others, one of Hawken’s greatest strengths is its ability to remain focused on what’s next instead of what the team already has accomplished.

It’s that focus that leaves Murray confident the Hawks have set themselves up for even more success as the postseason tips-off next weekend.

“We try to take it game by game, and all of those have been pretty big and meaningful wins for the team, but what we really try to do is take it day by day,” Murray said. “We had a cancelation on Saturday but we were able to reschedule with Revere, who is a perennially strong program. They’re the No. 7 seed in our super district. It’s going to be an extremely difficult challenge for us but it will be another taste of what it’s going to be like to play in the tournament. We have to approach it day by day. You can only play the opponent that is in front of you but every day we want to come in and leave the gym better than when we entered it.”

Hawken closes out the regular season on Monday against Berkshire and then the Hawks open the postseason at home against Fairview on Feb. 17.