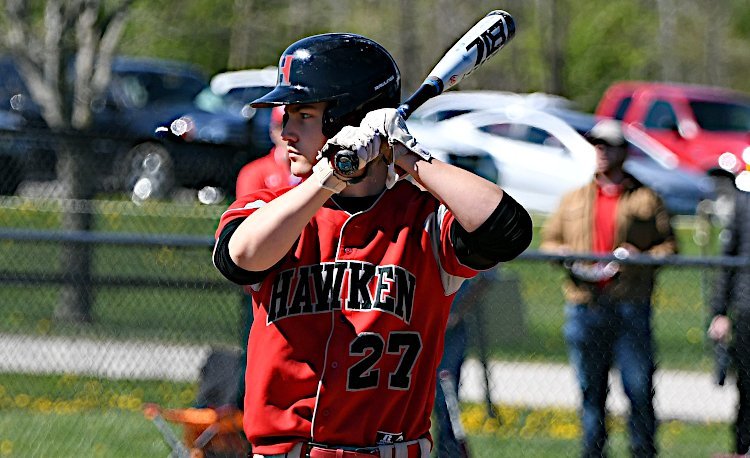 Hawken returns seven starters and a deep pitching staff leaving the Hawks with some lofty goals for the 2022 campaign.

Last spring, Hawken finished 21-6 overall and 9-3 in the Chagrin Valley Conference Chagrin Division. The Hawks won a sectional title and finished second in the conference standings.

“After having graduated only two seniors, we have high expectations for the 2022 season,” said Hawken coach Aaron Brandt. “We will have a deep pitching staff with seven or eight pitchers who I feel comfortable being on the mound and return 90-percent of the run production from our offensive line up. A senior class of eight players, four of whom are three-year varsity letter winners—it would have been four without the COVID season–will provide great leadership to mix with some younger talent.”

With a deep and talented roster, the Hawks have their sights set on winning conference and district titles this spring.

To do that, Hawken will have to shore up its defense.

“With some fortunate breaks, we look forward to having the opportunity to advance further in the state tournament this season,” Brandt said. “Finding the best defensive lineup will be the biggest challenge. We made too many errors in 2021, so we are looking for ways to maximize our offensive lineup without compromising our ability to make plays defensively. Another year of experience for most of our players should help as well.”

Hawken’s pitching staff remains one of the team’s greatest strengths.

Senior Devin Anthony headlines that group after finishing 3-1 last season with a 1.36 earned run average. A Wooster commitment, Anthony struck out 36 batters in 24 2/3 innings of work and allowed opposing hitters to bat just .180 against him.

“Devin had a great junior year, despite dealing with an arm injury mid-season,” Brandt said. “He has been a mainstay in our lineup since his freshman year and was selected as co-captain for the 2022 season. He will be our No. 1 pitcher and a solid bat in the middle of our lineup.”

Junior Eli Thompson is second in the pitching rotation.

Sophomore Lucas Brandt will provide another capable arm for the Hawks after missing last season due to a medical procedure. He’ll start at second when he isn’t pitching.

Senior Tommy Clark was 3-2 last season with a 4.32 ERA. He struck out 28 in 34 innings. He’ll play first base when he isn’t on the mound. He batted .321 last season with four doubles and a triple, 22 RBI, 19 runs scored, and seven stolen bases. He was named honorable mention All-CVC.

“Tommy was selected as a co-captain for 2022 and looks to anchor our infield with his leadership at first base and on the mound,” Brandt said. “Tommy has been a consistent hitter for the Hawks since his freshman year, driving the ball in clutch situations.”

Seniors James Ciofani, Josh Samulak, and Peyton O’Keefe, junior Dom Brancel, and freshman Asher Kimball also will chew up some innings on the mound for the Hawks.

Brancel is one of the top all-around players in Northeast Ohio.

He’ll start behind the dish and step up on the mound when called upon.

“Dom is a top catcher who led our offense last year in almost every category,” Brandt said. “Dom’s approach at the plate has made him one of the premier run producers in the area. His work behind the plate sets the tone for our defense, and his strong arm has shut down opposing running games. Dom’s focus throughout the offseason and during our preseason has him primed for a great junior year.”

“Our offensive lineup is balanced from top to bottom and we shouldn’t have to rely on any one or two players to carry us,” Brandt said. “We will have other players ready to step up and be able to have different players ready to take the lead that game.”

While the Hawks have the talent and depth to achieve their goals, they’ll also have to remain healthy, focused, and deliver timely hits and pitching when needed.

“As with any team, we will need to avoid injuries first and foremost,” Brandt said. “We dealt with some significant injuries in 2021, so hopefully we got those out of the way. Some of our losses happened when we had errors that came in bunches, so we need to minimize those occasions, finding ways to not let one mistake multiply to produce a big inning for our opponents.”