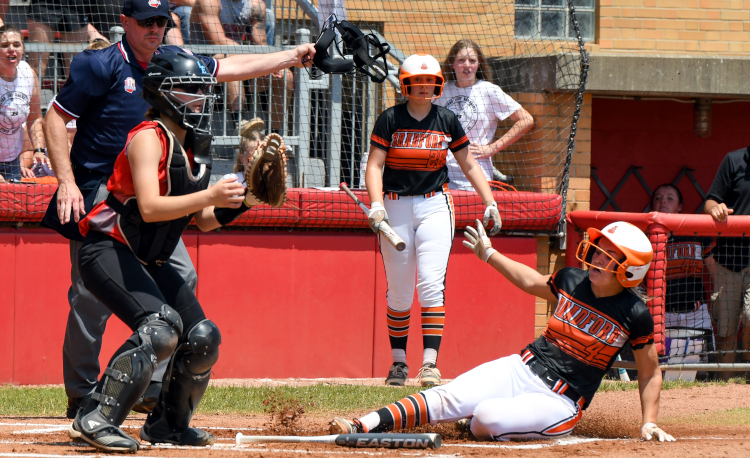 AKRON—Cuyahoga Heights’ bid for a second softball state championship was derailed by Bradford on Sunday afternoon at Firestone Stadium.

Heights, who won the Division IV state title in 2014, fell behind early and never recovered as Bradford recorded its third straight shutout to win its first state title, 8-0.

Bradford pitcher Skipp Miller, an Ohio University commitment, allowed just one hit in notching her 25th shutout of the season. Miller pitched a no-hitter in the state semifinals and finished the season with 12 no-hit games.

Miller’s sister, Austy Miller, led off the bottom of the first inning with a single and two picture-perfect bunts later gave the Railroaders a 1-0 lead.

Nylani Beiries doubled in the bottom of the fourth to start a four-run rally that sealed Cuyahoga Heights’ fate.

Maggine Manuel followed with a single and Emma Canan reached on an error that allowed two runs to score. Buzz Brewer doubled and Austy Miller followed with a double to score two more runs.

Bradford added two more runs in the fifth and one in the sixth to close out the scoring.

Tessa Studniarz singled in the first inning for Cuyahoga Heights’ lone hit of the game.

Bradford closed out the season with a 30-2 record while Cuyahoga Heights ended its campaign with a 22-5 mark.