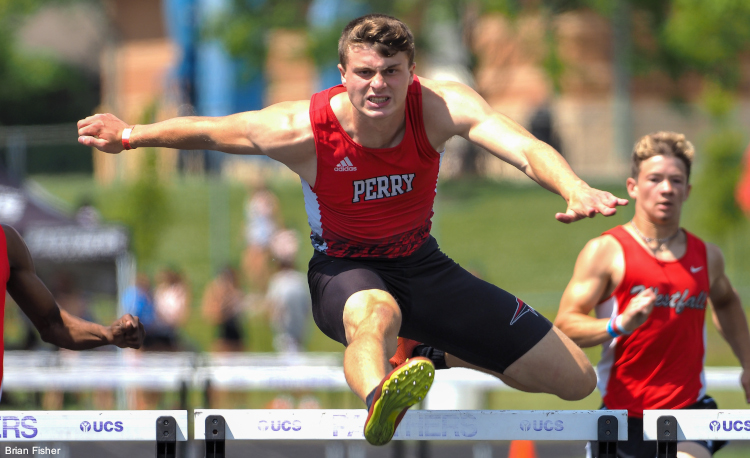 Richards led the Pirates to a fourth-place finish and highlighted a strong performance by Chagrin Valley Conference athletes over the weekend.

After winning the pole vault on Friday, Richards closed out the state championships with a win in the 300-meter hurdles with a time of 38.20 and a fifth-place finish in the 100 hurdles (15.32).

Beachwood senior Elizabeth Metz closed out her career with a pair of top three finishes. She placed second in the discus on Friday (142-1) and then finished third in the shot put on Saturday with a best toss of 42-feet, ¼-inches.

Houston, Cotta, Luxenburg, and freshman Kylie Walters clocked in at 1:45.39 in the 4×200 and senior Jack McPhillips, junior Noah Saidel, and sophomores Braylen Eaton and Caleb Berns finished in 3:26.06.

Chagrin Falls junior Rose Hoelzel placed seventh in the 1600 (5:10.64) and also ran a leg in the 4×800-meter relay. She teamed up with juniors Claire Stinson, Claire Coffey, and Azzurra Opperman to place fourth with a time of 9:30.76.

Alberts added All-Ohio honors in the 300-meter hurdles. She placed sixth with a time of 45.96.

Juniors Destynn Keuchel, Jordan Harrison, and Andrew Bukovnik finished fifth for the Hawks in the 4×100 with a time of 43.19. Seniors Michael Tropf and Zachary Lechman teamed up with O’Connor and Neimeier to lead the Tigers to a sixth-place finish in the 4×400 with a time of 3:26.04.

Brooklyn sophomore Jenna Young placed second in the high jump on Friday while Perry’s Brayden Richards was eighth in the pole vault and Wickliffe’s Jacob Lewis placed third in the long jump on the first day of action.

Geneva senior William Hanchosky was the lone All-Ohioan to come out of the Division I meet at Hilliard Darby High School. Hanchosky placed seventh in the 800 with a time of 1:55.46.

Independence cleaned up at the Division III meet at Westerville North.

Junior Emmett Stralka earned three All-Ohio medals with a third-place finish in the 200 (22.68) and he also placed sixth in the 100 (11.38) and ran a leg in 4×200-meter relay. He teamed up with senior Josh Belitz and juniors Jack Taliaferro and Kyle Zygmunt to place third with a new school record of 1:30.85.

Zygmunt also placed sixth in the 400 with a new personal record time of 49.87 seconds.

Freshman Casey Adams placed eighth in the long jump with a best leap of 16-feet, 5 ½-inches.

Trinity senior Jack Maloney closed out his career with a seventh-place finish in the 400 with a time of 50.71 seconds.

Javin Richards of @Perry_Pirates talks about winning a championship in the 300 hurdles, as well as this weekend’s big performances pic.twitter.com/XZ1ekCQ61u

The @BeachwoodBison 4×100 is ecstatic with winning the state title today, pic.twitter.com/igB3iP302r

Makayla White of @HawkenAthletics placed fourth in the 100and second in the 200 in the D2 state track meet. pic.twitter.com/XwK4tIX4Iu