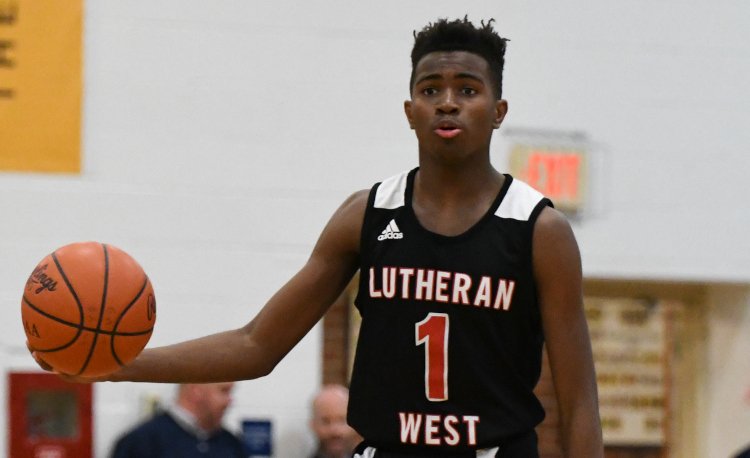 Sullivan Gymnasium in Cleveland was rocking on Friday night as Lutheran West knocked off host St. Ignatius, the third-ranked team in Division I, 78-54.

“Not many people gave us a chance tonight and I understand that,” said Lutheran West coach Jordan Duke. “St. Ignatius is a great team that we really had trouble with last year at our place (a 57-38 loss), not to mention they made the ‘Final Four’ and were a preseason state-ranked team this year by the Plain Dealer, so, yeah, I get it. But we set out to let the area know who Lutheran West is and this was a game we wanted to come out and play well in for sure; something that we could put on our resume.”

The Longhorns, who improved to 5-0 on the year, never trailed.

Lutheran West led 21-8 after the first quarter thanks to 3-pointers from Derek Fairly, Jayson Levis, and Josh Meyer.

Dylan Bartchak added a 3-pointer in the second quarter to push the lead to 24-8 but St. Ignatius responded with a 15-3 run over the next three minutes to pull to within 29-23.

Not to be outdone, the Longhorns close the half on a 6-2 run to take a 35-25 advantage into the break.

St. Ignatius went on another run to pull to within 41-36, but Lutheran West weathered the storm and held on for the win.

“Not going to lie, I was a bit worried when they cut it to five there and their student section came alive,” Duke said. “But all the credit goes to these kids, they could have folded but they did the exact opposite. They dug down and again didn’t back down, a testament to their character.”

Independence drained four 3-pointers in the second quarter and never looked back in a 42-34 win over visiting Berkshire on Friday.

Berkshire’s Maddy Triskett scored five of her game-high 16 in the first quarter and Natalie Hering added four of her seven to help the Badgers continue their hot streak following a big win over Kirtland on Tuesday.

Addie Westerburg drained a three early in the second quarter to kickstart Independence’s offense, and then Addie Walker hit back-to-back threes to cap off a 9-0 Independence run that gave the Blue Devils their first lead of the game, 20-15. Kara DeSmith also hit a 3-pointer in the frame.

Independence held the lead the rest of the way.

“The start was slow, but Berkshire is an aggressive team and a well-coached team, so they kind of took it to us right away and we were on our heels a little bit,” said Independence coach Hugh McMahon. “We got a spark from a bunch of girls who normally don’t play a lot of minutes and they came in and kind of got us going, and that ignited the whole team, which I thought was great.”

Westerburg led the Blue Devils with 11 points and Walker contributed with seven. Cat Rieger pitched in with seven points, and Kara DeSmith added six, including a key 3-pointer in the second quarter.

Westerburg scored five more points in the third quarter as the Blue Devils increased their lead to 30-24.

Casey Adams added a fourth-quarter 3-pointer to finish with five points and Paige Priebe and Macey McGhee both scored two points for the Blue Devils, who improve to 2-3.

“I loved our effort,” McMahon said. “I think we have to take the next step and hold ourselves accountable to execute, and that’s why you need games like this against well-coached teams who are physical because it forces you to execute. We did some really nice things down the stretch and there are some things we can work on. This is just our fifth game so we’re definitely learning and it’s good that we want to learn how to play in front.”

Berkshire didn’t suffer a hangover after its 41-20 win over Kirtland on Tuesday.

The Badgers came out fast and played aggressively.

“That’s one of the best games we’ve come out and played in the first quarter,” said Berkshire coach James Bosley. “I think we got up to like a seven-point lead right away. We’ve started kind of slow recently, so it was nice to see us come out and play fast like that and get after it. It’s just wear and tear in a physical game like that and we’re not really deep right now and we had an injury early in the game that we battled through.”

The Badgers also battled back in the second half to put themselves in a position to win the game, but Independence outexecuted them down the stretch.

“We had it down to four and if we hit a shot here or there, it’s a whole different game,” Bosley said. “Hats off to Independence, they played a full game.”

Kirtland bounced back from a disappointing offensive performance in a loss at Berkshire on Tuesday with a well-played 43-42 win at Brooklyn on Friday.

The Hornets, who scored just five points in the first half and 20 points total in that loss to Berkshire, found their offense early against the Hurricanes.

“We came out and scored 16 points in the first quarter and we haven’t done that all year,” said Kirtland coach Matt Ridgeway. “We ended up scoring 26 in the first half and we only scored 20 at Berkshire on Tuesday night. It really came down to we didn’t turn the ball over. The girls executed to put the ball in the basket, and we got off to a fast start.”

Brooklyn also hit shots early as the Hurricanes were within 16-14 after the first quarter.

The Hornets then outscored their hosts in the second quarter, 10-7, to take a 26-21 lead into the break.

The Hornets took the lead for good when Emily Ridgeway was double-teamed in the paint and kicked the ball out to Natalie Glowe, who buried the go-ahead basket with just over a minute left.

Glowe finished with a team-high 14 points despite also being tasked with slowing down Brooklyn standout Shariah Gailes, who scored a game-high 15 points.

“That girl can play, and Natalie held her to 15 and she made every basket difficult for her,” Ridgeway said. “Not only did she make it difficult on her, she also score on the other end. That was such a huge advantage for us. She’s been amazing for us and even after not playing well on Tuesday, and she knows that; she’s staying after practice on Wednesday and asking what she can do to get better. That says a lot about her character.”

Glowe scored four points in the fourth quarter to lead the Hornets to the comeback victory. Emily Ridgeway contributed to the win with 12 points and Julia Fleming added nine in addition to handling Brooklyn’s pressure and running Kirtland’s offense. Corinne Greenlee pitched in with four points and Brynn Bradac and Nora Withrow each finished with two.

Genesis Caraballo joined Shailes in double figures for the Hurricanes as she finished with 12 points. Delaney David scored nine for Brooklyn.

Perry’s offense was in sync in knocking off Orange on Friday night.

The Pirates scored 17 points in both the first and second quarters to lead 34-19 at the break and then closed out the game with 20 points in the third and 24 in the fourth.

Grace McKoon led Perry with a game-high 24 points and Rosalyn Tharp and Jaidyn Newsome also scored in double figures with 17 and 12 points, respectively.

Honor Hall and Mya Johnson both scored in double figures with 18 and 17 points, respectively, to lead Richmond Heights to its sixth straight win of the season.

The Tigers improved to 4-1 with a dominating win over Lakeside.

Lilly Stukus led the Tigers with a game-high 20 points. Elana McGinnis and Kate Bartlett also scored in double figures for the Tigers with 12 and 10 points, respectively.

Troy Domen tied for the game-high with 20 points, Jake Bean added 19, and Paul Gall scored 14 for the Huskies.

Bean and Domen both drained three 3-pointers in the game.