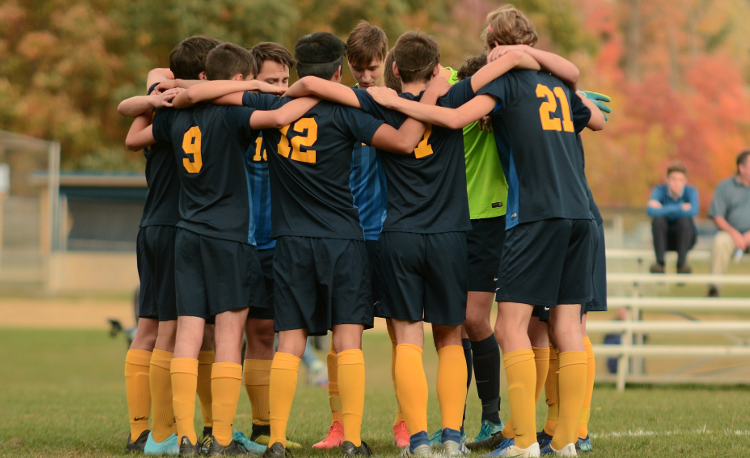 irtland’s boys’ soccer team had plenty of inspiration heading into Saturday’s Division III district championship game against Andrews-Osborne Academy at Aurora High School. Not only did the Hornets have a chance to win a third district title in the last four years but they also had the opportunity to avenge one of their four losses this season.

The Hornets scored two early goals and added another in the second half to beat the Phoenix, 3-2.

“My assistant coach really took some good notes from our first matchup so we knew what we were facing,” Kirtland coach John Valentic said. “We needed to play a good solid defensive game, which we did, and the goals we gave up, no disrespect to anyone, there were some midfield breakdowns. When we were organized, we were in control and knew what we needed to do.”

A penalty in the box gave the Hornets their first scoring opportunity just five minutes into the contest.

Valentic took a gamble and pulled keeper Tyler Banyasz out of the goal to take that penalty kick and he delivered to give the Hornets a 1-0 lead.

“That was a bit risky because if he would have missed, I’m not sure what would have happened,” Valentic said of leaving the goal unattended. “He’s a very good penalty kick taker so I felt confident he’d make it.”

Peter Vukovic then finished off a Jason de Zwaan pass to give the Hornets a 2-0 advantage 10 minutes into the game.

“That was huge,” Valentic said. “We went down 2-0 to them earlier in the year and we couldn’t score until the last 10 minutes of the game, so it was crucial that we scored first because I knew their tactic would have been to park the bus and make it difficult for us. It was huge going into halftime.”

Andrews cut its deficit in half midway through the second when Andro Filipovic capitalized on some confusion in the midfield.

“They caught us out of organization,” Valentic said. “Their No. 21 is a fantastic player and it’s hard to shut him out at any point, let alone for 80 minutes.”

Kirtland responded with its second penalty kick of the game.

Josip Mijic-Barisic was tackled in the box and converted his penalty kick try to push Kirtland’s lead to 3-1 with 10 minutes remaining in the game.

That insurance goal was crucial as Filipovic scored again with six minutes left.

“He got behind us on a through ball out wide on the left and he slotted their second goal home,” Valentic said. “We were able to ride it out until the end.”

The Hornets, who improved to 15-4 overall, advanced to Wednesday’s regional semifinal against Kidron Central Christian. The game is scheduled for 7:00 p.m. at Streetsboro High School.

Wednesday’s meeting will be the third between the Hornets and Comets since 2016.

Last year, Kirtland won in overtime, 3-2, to advance to the regional final and in 2016, the Comets ended Kirtland’s season in a regional championship game, 2-0.

“I know how they play and I know their system and their style,” Valentic said of the Comets. “It’s easy to do that, but it’s harder to stop. We will prep the boys and tell them what to expect and how they like to play and see if we can match their energy. If we can come out and play like we did today as far as energy and desire, we’ll be in the game. As long as we can compete we’ll be OK.”

Independence and Hawken both punched their tickets to the state tournament after finishing first and second at the Division II Sable Creek District tournament on Thursday.

Kirtland scored 36 unanswered points in a 36-16 win over visiting Perry in a clash of CVC Chagrin Division titans.
Load more