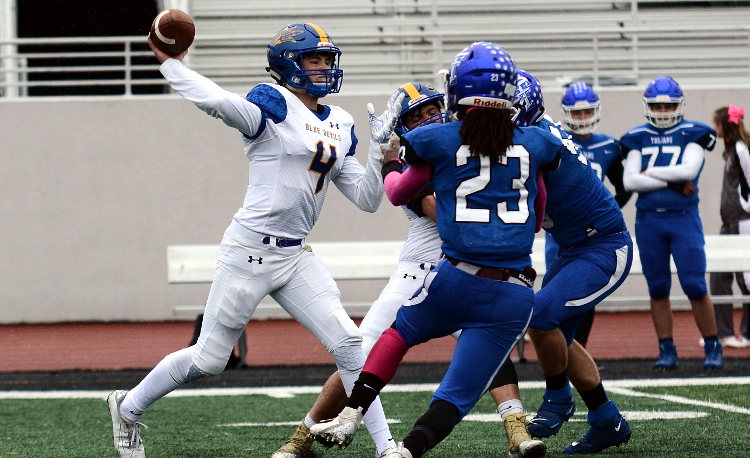 BEDFORD—Independence converted four turnovers into touchdowns on the way to beating host Trinity at Bearcat Stadium on Saturday, 42-24.

With the win, the Blue Devils clinched a playoff berth for the first time since 2010.

“It’s very exciting,” Independence coach Rick Adams said. “It’s been one of the goals for us since we’ve been here. We haven’t been (to the playoffs) since 2010, so it’s really exciting for the kids.”

After a scoreless first quarter, Independence’s Luke Clymer recovered a fumble at the Trinity 4-yard line and Kyle Zygmunt scored on the next play to give the Blue Devils a 7-0 lead with 10:00 left in the first half.

One minute later, Jake Mitrisin picked off a pass and returned it 65 yards for a touchdown and a 14-0 Independence lead.

Trinity went on to score 17 unanswered points to take a 17-14 lead into the break.

Kirk Colvin caught a one-yard touchdown pass from Ian Anderson with 5:25 left in the second quarter and Brenden Port picked off a pass to set the Trojans up at the Independence 10. Mitchell Knotek booted a 36-yard field goal to pull the Trojans to within 14-10 with 1:40 left and one minute later, Dominic Blackstock hauled in a 36-yard pass from Anderson to give Trinity its first lead of the game.

Zygmunt opened the third quarter with a 27-yard touchdown run but Zion Owens responded with a 67-yard scoring run on Trinity’s first possession of the half to regain the lead, 24-21, with 8:15 left in the third quarter.

Independence’s Adam Miklovic recovered a fumble at the Trinity 41 and Michael Tommer later scored on a one-yard run to put the Blue Devils back in front for good, 28-24.

Braden Sears then caught a Tommer pass on third-and-8 and ran down to the Trinity 8-yard line. He carried five Trojan defenders the last 10 yards.

“He was huge for us,” Adams said of Sears, who caught a 10-yard touchdown pass to close out that drive. “On that play, we went four verticals and he comes across the middle. Michael read the safety, who went with the vertical up the seam and that left Braden wide open. He was a tank when he caught the ball and he got about another 10 yards after the first contact and put us in a position to score.”

Trailing 35-24, Trinity recovered a fumble at the Independence 40 with 1:46 remaining in the game.

Clymer’s 40-yard pick-six slammed the door on the Trojans.

Independence improved to 7-2 on the year while Trinity dropped to 4-5 and was mathematically eliminated from the playoffs.

The Blue Devils close out the regular season at rival Cuyahoga Heights while Trinity travels to Lutheran West.

Independence hasn’t won at Cuyahoga Heights since prior to the 1999 season and has beaten the Redskins just three times in the last 20 years.

With a potential postseason home game within their reach, the Blue Devils have a lot to play for on Friday.

Cuyahoga Heights has won five straight against Independence, who hasn’t hosted a playoff game since 2009.