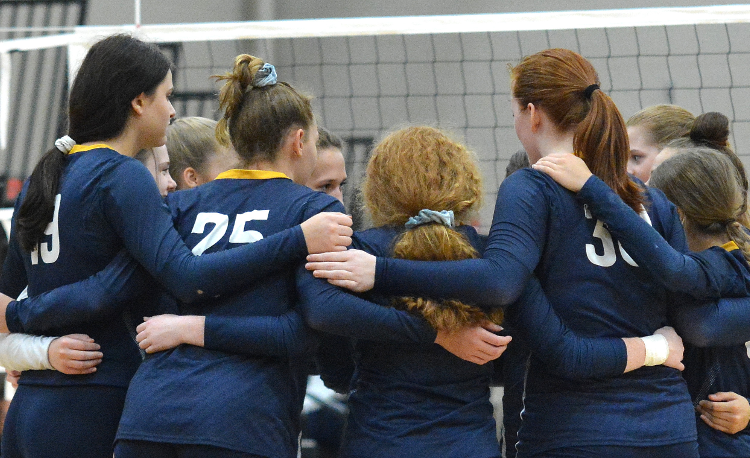 A devastating loss to Cardinal on Thursday was supposed to have ended Kirtland’s hopes of winning the Chagrin Valley Conference Valley Division title this fall.

But on Tuesday, it was those same Huskies that knocked off Grand Valley in five sets that left the Hornets and Mustangs in a deadlock for first place.

“This is absolutely amazing,” Kirtland first-year coach Arlayna Newcomer said of winning a share of the conference title. “I’m actually a little speechless right now. We went into the season and the girls had to face some extreme adversity with a whole new program and coaching staff so it’s amazing and I’m really happy for the girls. They earned every bit of this.”

Cardinal won the first set but dropped the next two, leaving Grand Valley in position to win the title outright. The Huskies bounced back and won the final two sets in dramatic fashion.

The Hornets opened conference play with a five-set loss at Grand Valley, which set the tone for the rest of the season.

“We lost that game in five and like I said then, I was excited to play them again because I knew what the girls were capable of,” Newcomer said. “It’s really a testament to how good of a team they are and how hard they’ve worked. I’m just really excited for them.”

Kirtland won the second match against Grand Valley, 3-1. Both teams lost to Cardinal in the final week of the regular season.

The league title is Kirtland’s first since 2011 and just the third in school history.

With one goal checked off, the Hornets now turn their attention to the postseason.

The 17-4 Hornets earned the No. 3 seed in the Division III Burton District and will play the winner of the sectional semifinal between No. 6 LaBrae and No. 11 Warren Champion on Oct. 19 at Berkshire.

Newcomer hopes the Hornets enjoy their successes but at the same time, she wants them to remain focused on their other goals.

“I talked to the girls and I told them I want to celebrate the victories and everything else, every good thing that happens to us,” she said. “I want us to celebrate and I want them to take this moment and live in this moment and be proud of what they’ve done. Moving forward, we talked about it after our game tonight; I want them to focus on the next step. We have our eyes on a sectional championship right now. We’re taking steps to get there. Once that’s done, we’ll look forward to what we’ve got next after that.”