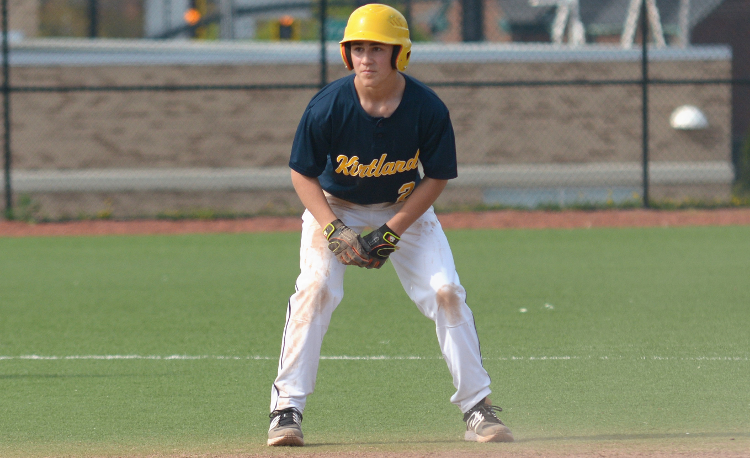 Jack Dever’s RBI single in the bottom of the eighth inning led Kirtland to a 5-4 win over visiting Wickliffe on Thursday.

The victory also earned the Hornets a series sweep of the Blue Devils in a key two-game Chagrin Valley Conference Valley Division matchup.

“That’s a clutch win right there,” Kirtland coach Luke Smrdel said. “It’s great momentum for us heading into the rest of the schedule for the CVC. Wins like this go a long way too, especially with a pretty young team. The adversity they showed and toughness they showed, it was great to see this early in the season.”

Kirtland, who improved to 3-2 overall and 2-0 in league play, got off to a fast start.

The Hornets scored two runs in the bottom of the first when Joey Mongelluzzi and Seann McGill hit back-to-back one-out singles. Mongelluzzi scored on a wild pitch and McGill crossed the plate on a fielder’s choice.

Kirtland added another run in the third off Joey Torok’s leadoff double and McGill’s RBI single.

Wickliffe pulled to within 3-1 in the top of the fourth on two hits and an error but the Hornets responded with one in the bottom half of the inning.

Torok hit a two-out triple and scored on Mongelluzzi’s single.

“We came out hitting the ball,” Smrdel said. “They made almost every play. Their defense is very sound. Wickliffe is a very good team. They worked out of some tough situations. It was back and forth but we came out swinging and ended up hitting at the end.”

The score remained 4-1 until the sixth when the Blue Devils capitalized on two singles and two walks to push across another run.

Mason Sullivan threw the first six innings for the Hornets.

He allowed one earned run on eight hits and struck out four.

“He got up there in pitches a little bit but he pitched a great game,” Smrdel said. “He pitched out of two bases-loaded jams and was really tough out there.”

An error, a single and three walks allowed Wickliffe to tie the game in the seventh and the Blue Devils had an opportunity to score the go-ahead run but Andrew DeMarco made a diving catch to end the rally.

McGill pitched his way into the jam but, with the help of DeMarco, found a way out of it.

“McGill came in and picked up the win,” Smrdel. “He walked a few guys there in the seventh but he worked through it and got the last out. Andrew DeMarco made a fantastic catch in the seventh-inning to get us out of a bases-loaded jam.”

Kirtland moved a runner into scoring position in the bottom of the seventh but couldn’t get the clutch hit to end the game in regulation.

McGill walked to Blue Devils in the top of the eighth but again worked his way out of the jam.

Sullivan hit a one-out double to the wall to set up Dever’s game-winner.

“It took a funny little bounce passed the guy a little bit and Mason with his speed was on second base before you knew it,” Smrdel said.

Dever, who was 0-for-3 with two strikeouts, stepped up to the plate and drove a 2-1 pitch into left field.

“It was a great feeling to come up clutch and deliver for the team,” Dever said. “Stepping up to the plate, I knew that we just needed a single because Mason’s speed would allow him to score easily from second base. I hit a 2-1 fastball to left field and just knew the game was ours to have.”

McGill picked up the pitching victory and led the Hornets at the plate as he was 3-for-3 with an RBI. Torok and Mongelluzzi both finished with two hits.