Hornets reload for another postseason run 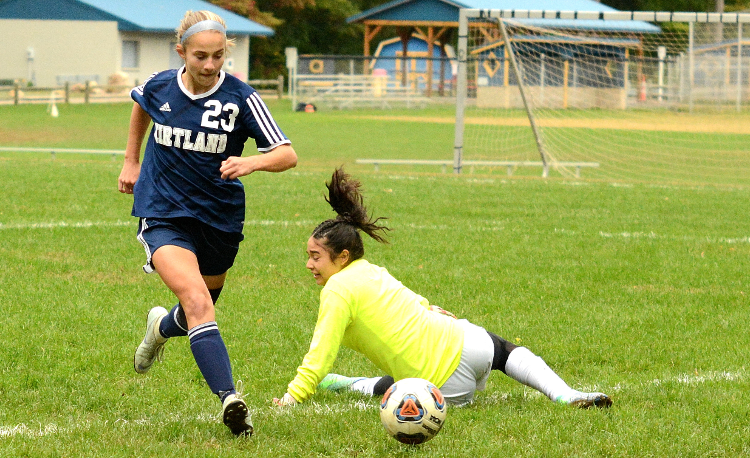 Bradac knows the talent and experience his team possesses but he’s also aware of the big cleats the Hornets must replace.

“I believe that we have a group that can make another deep run in the state playoffs,” Bradac said. “One of the major challenges that we will have is not living on our past success. This group of young women will need to prove that they are as good as teams of the past and in some ways may be better.”

In fact, Bradac sees a lot of similarities between the 2020 Hornets and the 2015 squad that beat state powers Gilmour and Hawken in the postseason on the way to claiming the first regional championship in school history.

Since then, the Hornets have won four regional titles and played in two Division III state championship games.

“I am excited to see this team play,” Bradac said. “This team reminds me of our team from 2015; a great mix of athletic players and technically skilled players.”

The Hornets do return five starters from last year’s squad that finished 17-5 overall and played in the state Final Four.

Kirtland also has six others who gained valuable experience last season but the graduation losses of four-year starters Mya Zovko and Lidia Rodin, among others, left behind gaping holes the Hornets must fill.

Zschuppe scored 36 goals with 12 assists last season on the way to being named first-team All-Ohio. She also was a first-team all-conference, All-Greater Cleveland and All-News-Herald selection and a regional All-American.

“Entering her junior year, Erika is one of the best soccer players in the state,” Bradac said. “She not only matched her goal-scoring but exceeded it during her sophomore year. She did this while suffering a broken nose and playing in fewer games than the year before.”

“Mia is a tireless worker and I am excited to see what she will do as a starter this year,” Bradac said. “Over the past two years, Mia has scored some important goals for us and I see no reason why that will not continue in 2020.”

The Hornets have three seniors and two juniors in the midfield.

“Maria’s soccer IQ is tremendous,” Bradac said. “She enters the 2020 soccer season in the best shape of her life. She was one of our leaders all summer in the weight room and on the track. I’m excited to see what she will do controlling the midfield.”

Aria Evans-Roskos returns to the starting lineup after scoring 10 goals and 15 assists as a junior. She was named second-team All-Greater Cleveland and second-team all-CVC.

“Aria dedicated this summer to transforming herself into the best soccer player she could be entering her senior year,” Bradac said. “She is faster and stronger than a year ago and her touch on the ball is outstanding. She will join Maria and Giulianna (Vladic) in creating an incredibly strong central midfield for our team this year.”

“Leah has been on the varsity since her freshman year and I truly believe this year will be the year that she will have the greatest impact on our team,” Bradac said. “She is one of our captains and for good reason. She is a leader both on and off of the field. Last year, she scored the game-winning goal against Berkshire to send us to the regionals for the fourth time in five years.”

The juniors include Vladic, who scored one goal with two assists last season, and Reilly Greenlee, who finished the year with one goal and one assist.

“Giulianna is ready to show what she can do now that she has earned a starting position for the 2020 school year. Giulianna has great touch on the ball and tremendous vision for the game,” Bradac said. “(Greenlee) will pair with Leah at playing our outside midfield positions. She has proven what an amazing runner she is over the past two years, now she is going to show everyone her soccer skills. She is a truly gifted athlete who will be instrumental this year to our team’s success.”

Yurick is a four-year starter and joins LaVerde and Evans-Roskos as one of three tri-captains.

“Amber will anchor our defense this year with her tremendous work ethic and incredible presence,” Bradac said. “Macey is going to join our backline and play one of our outside marking back positions. Macey has worked hard this past summer and she has earned her starting position. The same effort that she has shown on the basketball court will be the same effort we will see on the soccer field this year. Corinne will take on the role of covering our opponent’s best attacker. Defensively, she is solid. Last year, I could count on my one hand how many times she was beaten; it just did not happen. She is technically one of the best defenders we have had at Kirtland and she is only a sophomore.”

Senior Corinne Aquila returns in the net for the Hornets.

Last season, she recorded 10 shutouts and was named second-team All-Greater Cleveland and all-conference.

“Corinne is one of the best goalkeepers in our area,” Bradac said. “Her performance two years ago in the state finals game set her apart from other goalies in the area. From her sophomore year until now, she has gotten better in so many ways. She is a vocal leader and has the ability to read the game. Her skills have improved each and every year.”

Once again, Kirtland has the talent to make another deep run in the postseason but, like every other team, the Hornets must stay healthy and quickly develop the chemistry the team will need to win the tight games.