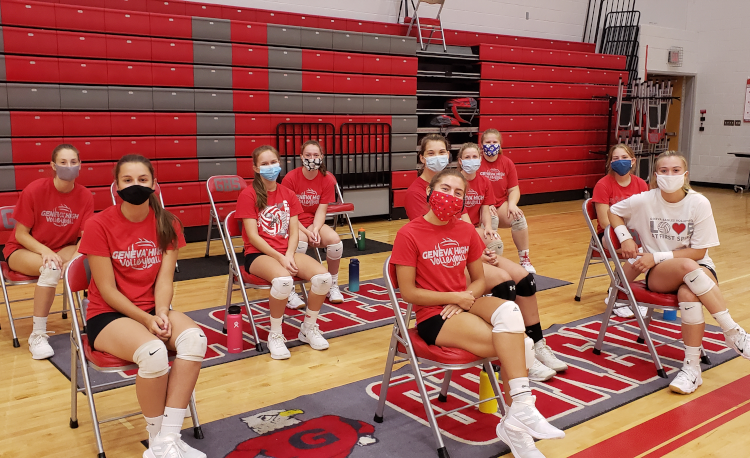 The Eagles, who finished 19-4 overall and 11-2 in league play, must replace two outside hitters, including CVC MVP Jordan Vencill, and the starting setter, but head coach Annah Haeseler, the Co-Coach of the Year, is confident her squad is up to the challenge.

“I think we are a well-rounded team with a deep bench,” Haeseler said. “I’m hoping to fill those (holes) with some young players that will add a new dimension to our team. I’m looking for our seniors to help lead the younger players and for our junior middles to take the lead.”

Geneva will focus on one service at a time but Haeseler also wants her players to play aggressively.

“I want the new players to push and to take chances,” Haeseler said. “With (being) young comes a lack of experience under pressure, but I’m hoping the seniors take away that pressure.”

Stoltz was named first-team all-league and second-team all-district after recording 28 service aces, 40 assists and 333 digs with a school record 4.5 digs per set average.

“Morgan is a tough libero with the experience and knowledge of the game like no other,” Haeseler said. “She will be a key factor in our success.”

“Chrissy is calm and cool,” Haeseler said. “She leads with a positive attitude. Her setting is on point and she will play all-around for us this season.”

Junior middle Kennedy Landrus will be counted on to step into Vencill’s role.

“Kennedy will have big shoes to fill, but she will be one of our biggest attacking threats this season,” Haeseler said. “She will be in the middle and maybe some outside. She is powerful and a smart player.”

“Kaitlynn will fill in on the outside this season,” Haeseler said. “Every year, Kaitlynn gets more aggressive and more confident. She will be a go-to player for us this season.”

Wayslaw is a middle hitter while Caswell and Raymond are outside hitters. Caswell also can fill the defensive specialist role.

Rhodes is a rightside hitter and Richmond can play on the outside or in the middle.

“Lilly is a strong lefty player that is looking to dominate the right side. She is strong and comes in with a full swing,” Haeseler said. “I’m looking for Brooke to take charge of the middle this season. She jumps well and has smart net play. She has great hands and with experience and confidence, she will be unstoppable.”