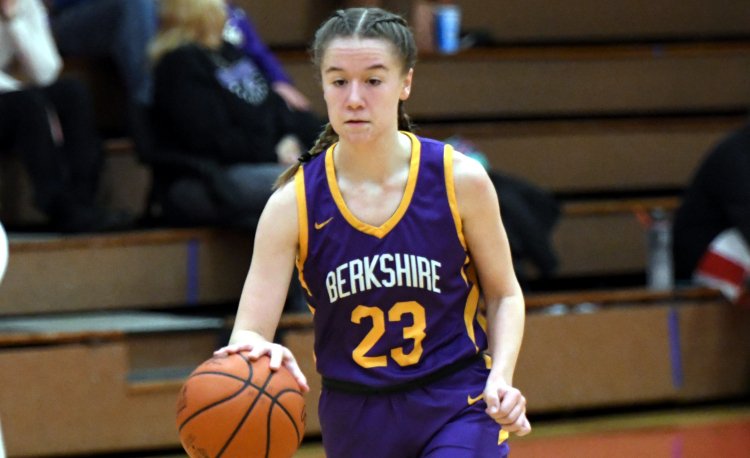 Berkshire spread the wealth in defeating rival Cardinal in a Chagrin Valley Conference Valley Division showdown at Berkshire on Wednesday, 54-28.

Caroline Kuchling, Hayley Stoddard, and Natalie Hering combined to score 32 points for the Badgers, who improved to 8-7 overall and 3-5 in league play.

“We had a very good overall shooting night,” said Berkshire coach James Bosley. “I think we shot about 45-percent from the field, but Caroline, Natalie, and Stoddard combined to shoot 14-for-20, and when they shoot like that it makes a huge difference in our offense. Add that with the consistent play of Maddy Triskett and things are really starting to click for us.”

Triskett scored eight points with six rebounds in the win.

Berkshire jumped out to a 10-3 lead in the first quarter and never looked back. The Badgers outscored the Huskies the rest of the way, 44-25.

That success started on the defensive end with Kuchling recording five steals and Kylie Neumore and Lydia Kastor accounting for three more each.

“Caroline and Kylie set a tone defensively getting deflections and steals,” Bosley said. “It was nice to see Caroline and Natalie both have good offensive days. They both stepped up with Cardinal’s defense keying on slowing Lydia down. Cassie Nguyen plays very hard defensively and with their injuries, she has shown she is ready to step up offensively for them.”

“Our posts, Lanie (Wadsworth), Hayley, and Brooke (Ruchalski) did a really good job running the floor in transition and that’s where Kylie Neumore really becomes a great facilitator of our offense,” Bosley said. “She has great vision and plays so unselfishly.”

Berkshire has now won three straight and six of their last seven after starting the season 2-6.

“This is a great win for us because so many are gaining confidence,” Bosley said. “We are close to reaching our peak and it’s going to set us up for the postseason.”