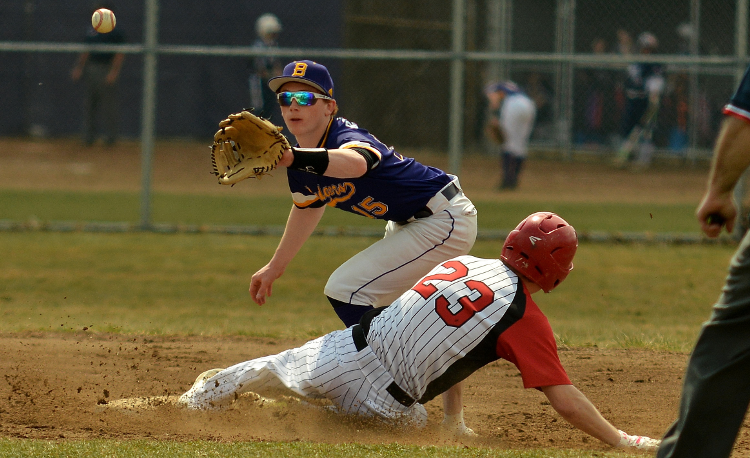 BURTON—Cardinal scored three runs in the top of the 12th inning then shut down rival Berkshire in the bottom of the frame to pull out an 8-5 win in the season finale between the two Chagrin Valley Conference Valley Division schools.

The Huskies led 5-1 before the Badgers tied the game with three runs in the third and another in the fourth. The game remained scoreless for seven straight innings before Cardinal scored the decisive runs.

“That was such a great game,” Cardinal coach Seth Klepper said. “You hate to see a team lose in a game like that when you go 12 innings but it felt good and the kids were happy. It just stinks someone had to lose.”

Cardinal took a 1-0 lead in the top of the second when Justin Byler led off the inning with a double and moved to third on an error. He scored on Jerry Rose’s sacrifice fly.

The Badgers responded in the bottom of the inning.

Peter Brent led off with a double to right center and moved to third on Jacob Smetana’s single. Dylan Spangenberg then knocked him in with an RBI single.

The Huskies batted through the order in the third to pull ahead 5-1.

Berkshire pitchers buckled down after that and faced just two batters over the minimum through the next eight innings.

“Our pitching was solid,” Berkshire coach Brian Hiscox said. “We had a shaky inning early and obviously that three runs in the 12th hurt, but I thought Michael Brilla and JT Bergmeier did an extremely good job of keeping their hitters off balance.”

Joe Barcikoski and Bobby Czekaj led off the inning with back-to-back singles and Jacob Brown hit an RBI double. Smetana cleared the bases with a two-out double.

Sam Roach’s leadoff single in the bottom of the fourth led to the game-tying run when he stole second and third and scored on an error.

The Badgers loaded the bases in the bottom of the seventh but Shank struck out the final two hitters to force extra innings.

“Justin, our super soph, he pitched a gem,” Klepper said of Shank, who allowed four earned runs on 10 hits and struck out nine in eight innings of work. “He kept throwing strikes. He had his curveball working and kept us in the game.”

Berkshire pitchers retired 13 straight Huskies from the third out of the sixth inning until Robby Granny’s 11th inning single.

The Huskies finally got things going again with one out in the 12th.

Hogue singled and moved to third on Shank’s double. Carney then doubled home two runs and he scored on Byler’s two-out single to give the Huskies an 8-5 lead.

“I told them right before we went out that we had to string something together,” Klepper said. “Brice set the table and he delivered. Justin has had some issues lately but he got them all straightened out with a couple of hits and Matt had a big hit too.”

Carney then went out and shut down the Badgers in the bottom of the inning to seal the Cardinal win.

He picked up the win after pitching four scoreless innings with five strikeouts.

“He’s had some back issues but in the morning he said he’s a couple (of innings) in him,” Klepper said. “I said we’d see what happens and then I told him to give me two. He went out and pitched four.”

Byler led the Huskies with three hits while Hogue, Shank, Carney and Collins each finished with two.

Czekaj was 3-for-6 for the Badgers and Barcikoski, Brown, Smetana and Spangenberg each finished with two hits.

“Our guys were disappointed,” Hiscox said. “Obviously, we wanted to win and we had opportunities. We just couldn’t come through with a clutch hit when we needed it, but a game like that can build confidence because Cardinal is a good team. That’s a game that will definitely pay benefits down the line.”