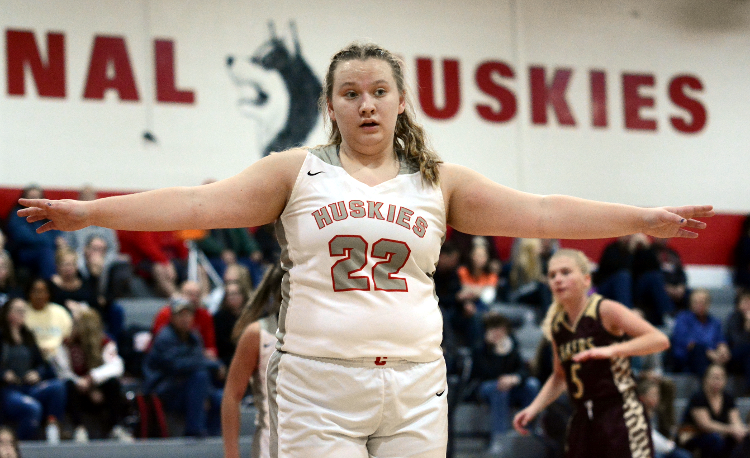 Haley Domen scored 20 points and Julianna Pollack added 12 to lead Cardinal to a 56-46 win over visiting Wickliffe on Wednesday.

The win was the first of the season for the Huskies and first in the head coaching career of Cardinal’s Joe DiMattia.

“It’s a relief just to get that first one out of the way,” DiMattia said. “The girls are excited; we’re excited. I just hope we can follow up with a couple more. We have some winnable games coming up. Hopefully, we don’t think ‘We got our win so now we can celebrate,’ and not work hard anymore.”

Pollack set the tone early as she drained three 3-pointers and scored 11 of her 12 in the first quarter. Her hot hand helped the Huskies to build an 18-13 lead.

Domen took it from there and scored seven points in the second quarter to push the Huskies’ lead to 36-27 at the break.

“(Pollack) missed a couple of games with a concussion so that’s the first game she scored,” DiMattia said. “She had three 3s in the first quarter that got us going pretty good. She can shoot.”

“For the first time in a long time, we didn’t run a zone,” DiMattia said. “We just manned up. The press was working so we were getting some easy shots at the hoop and we were making them.”

Wickliffe pulled to within two scores in the third quarter but Domen drained a pair of 3s to extend the lead.

The Huskies bent but didn’t break down the stretch to seal their win.

“We stayed in the press most of the whole game and we were just able to get a turnover or just get them riled up on the other end of the court to keep them from getting a good look,” DiMattia said.

“Lorena didn’t score a ton of points but we talked at halftime about how hard she was working down low and she turned it around,” DiMattia said. “Bri took the ball to the hoop and drew some fouls.”

Keller made it difficult for Wickliffe in the paint.

“She was the tallest one on the court so we stuck her down low,” DiMattia said. “She still has some work to do but she grew a little bit this game.”

“We put her on Levon and she kind of slowed her down a lot,” DiMattia said. “Cassie is a high-energy player. Nobody is going to out-hustle her. She got on Levon and really gave her a hard time. That really helps to take her out of the game. That’s big against Wickliffe.”