Huskies put it all together in win over Mustangs 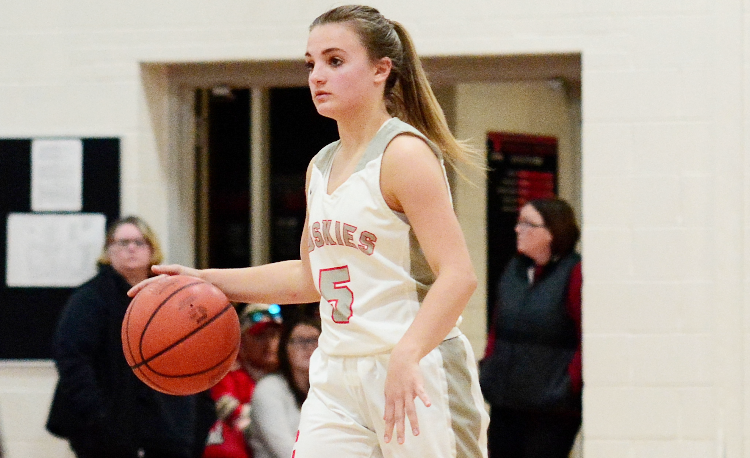 Cardinal has had trouble at times this season to put together a complete game. The Huskies didn’t have that issue in Saturday’s 50-37 win over visiting Grand Valley.

“Our goal was to come out and play four complete quarters,” Cardinal coach Joe DiMattia said. “We’ve struggled at times this year to come out and play like we should. We were disappointed on Wednesday at Lakeside because we should have hung with that team, but we fell behind 16-2 before we got going, and we needed to make sure that didn’t happen again.”

Taylor Soltis and Julianna Pollock helped the Huskies to build a halftime lead.

“Taylor came out and was playing great hitting her shots and getting steals,” DiMattia said. “Julianna Pollack knocked down some 3s in the first half as well. In the second half, our intensity was cranked up and we started to pull away with some easy buckets.”

After being held scoreless in the first half, Haley Domen found her rhythm in the second and finished with a team-high 16 points.

“I was getting everyone involved because Grand Valley was mostly focused on me and taking me away,” Domen said of the first half. “But in the second half, I played my game and a big thanks to all my teammates who encouraged me on throughout the game and just played our game.”

Soltis and Hailey Keller each finished the game with eight points and Ronee Collins, Pollock and Brianna Doolittle all contributed with six.

“Brianna Doolittle is starting to come around again after falling into a little slump,” DiMattia said. “She had six points, eight boards and six steals. Freshmen Hailey Keller and Ronee Collins had big games too. Keller had eight points and five boards and did a good job of keeping Grand Valley’s Alexis Mahaffey from getting every single rebound. Ronee had six points and had her hand in a lot of Grand Valley’s turnovers.”

Cardinal outscored the Mustangs in the fourth quarter, 13-6, to seal the win.

“Hats off to Bob (McKinney) though, because he was missing quite a few players and starters due to injury and other issues, but they gave us a good game and it wasn’t easy,” DiMattia said. “We are coming around though. We had a tough start to the season, but the girls are learning how they have to play if we expect to compete.”