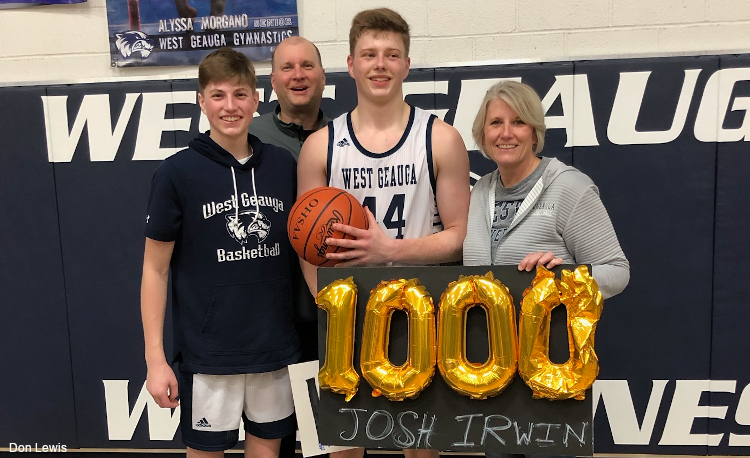 Josh Irwin scored 21 points and added 13 rebounds to lead West Geauga to a 58-55 win over visiting Perry in a key Chagrin Valley Conference game on Friday.

It was Irwin’s third-quarter 3-pointer that drew the most attention as with that basket he recorded the 1,000th point of his high school career.

“Josh scoring 1,000 points has meant the world to this program,” West Geauga coach Jeff Javorek said. “He has worked so hard for this his entire career. He’s the definition of hard work paying off.”

Irwin is the fourth Wolverine to reach the 1,000-point mark. He joins Andy Suttell, Terry Teachout and Matt Moran in that milestone club but he’s the first to do it as a junior. He also broke single-season and career records for rebounding and 3-pointers made.

“It was really exciting finally getting to that point,” Irwin said. “I give a lot of credit to my coaches and teammates for always getting me the ball. The most important thing is that we won so it was a great night.”

West Geauga set up the play to Irwin in a time out.

Peyton Bissler drove the baseline and kicked the ball out to Irwin, who was open for the long-range shot.

“Credit to Coach Javorek for drawing up the play and a great pass by Peyton Bissler,” Irwin said.

With the milestone achievement out of the way, Irwin remains focused on leading the Wolverines to the CVC title and a deep run in the postseason.

“I just hope to get as many wins as possible with my teammates and coaches,” he said. “We have a great group of kids that love to play and I cannot wait to continue the season with them.”

Bissler closed out the win with 18 points and Keegan Barnhart scored eight for the Wolverines.